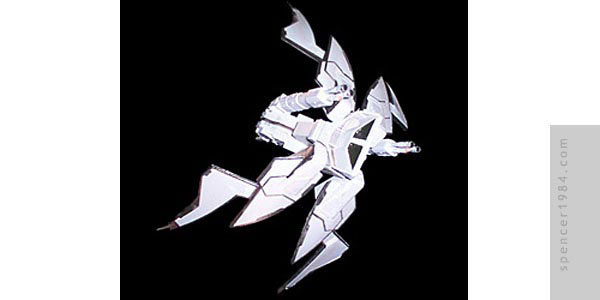 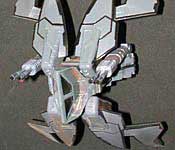 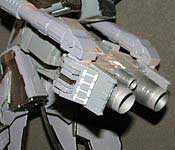 I think the Virago has to be one of the coolest-looking ships in the Star Wars universe. It is far more aggressive looking than amost any other ship, it's more powerful than most fighters in it's class, and do we really care if it violates the laws of physics to get it done?

I got this model kit several years ago, and it has been an on-again-off-again project since I got it. The interesting part about this is that I get to see many things I have learned over the years demonstrated in a single model - early stages of the fuselage and engines have several building imperfections that I now usually correct (or at least try to hide better). The basic kit was not bad, but it did have quite a bit of flash, plus some of the parts (like the engine nacelles) did not go together that smoothly.

The wing design was the kit's biggest weak point: the axles that hold the wings in place (one axle per pair of wings) are plastic "C" shaped rods, plus one gear section for each axle. The axles are mounted one above another, and the gear sections are supposed to mesh, making each pair of wings move together. In theory, this is a nice idea. In practice, things don't work out so well. Because the molding was not very crisp, the axles do not sit in their respective holes tightly, and the gears do not mesh together all that well. Plus, for reasons I have not yet been able to figure out, AMT decided the best way to mold the engine nacelles was to mold half of the axle hole in the side of the engine, and the other half in the engine's front cap. This means that the entire weight of each wing is held between two pieces that simply butt against each other (and no, there's nothing inside the nacelle to help steady or locate the wing). In the end, you are left with four loose axle stubs sticking out of the fuselage, giving a general idea of where the wings should be mounted. Once mounted, the nacelle cap on each wing will be popped off by the weight of the wing, unless you do some reinforcement of the sides of the engine nacelles. Or, if you don't care about posability, you can do what I did and glue the wings solidly to the sides of the craft in what you feel is their most appealing (i.e. menacing) formation.

Instructions and box art for the kit suggest a brownish-gray paint job with darker gray markings. I felt a darker, more sinister paint job would be appropriate, so I went with an achromatic dark gray and gloss black scheme. The entire craft was then clear coated and thoroughly weathered. The above photo really does a poor job representing the true color of the craft, but I used it anyway because I think it looks really cool - the camera flash gives it a ghostly appearance almost like a real space photo (I took the picture at night pointed straight up so that the sky was the backdrop).