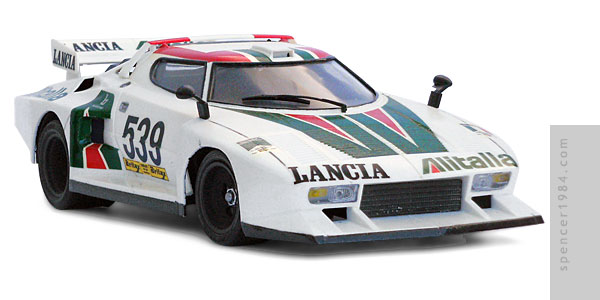 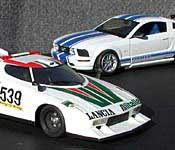 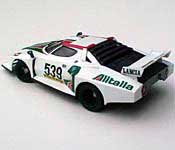 While I was correcting my Sunstreaker kit, I realized there were also some things I could have done on this model to make them more like the prototype. The first thing I did after disassembling the body was to paint the center of the rear deck black. I also "corrected" the decals - the #539 Lancia Stratos was sponsored by Alitalia, the Italian airline company. The toy Wheeljack, however, had the sponsor altered somewhat to read "Alitalla". To make the change, I mixed up a dark green to match the car's decals, and simply filled in the gap in the second "i" to turn it into an "l". The body was also gloss coated and the inside was painted black to lose some of the "plastic toy" look.

I did vary from the toy in a couple of places: the black strip around the front spoiler and rockers did not exist in the toy or the cartoon, but it was present on the original race car and on the Marlboro Diaclone version of Wheeljack. Also, the rear window louvers should be white (or striped), and the "b" pillars should be dark green, but I left both as they were because I like the look.