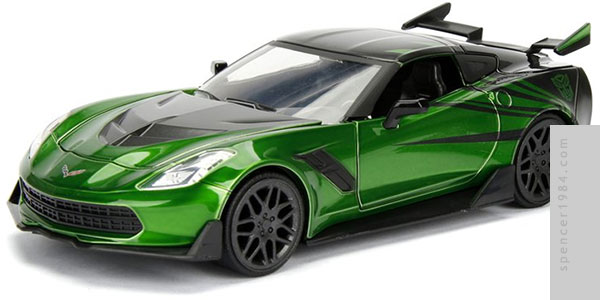 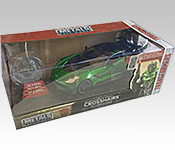 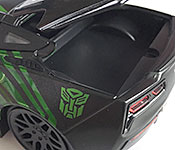 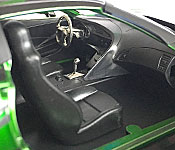 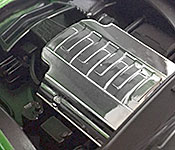 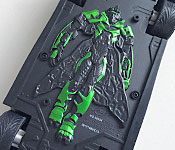 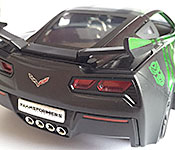 Originally appearing in Age of Extinction, Crosshairs is the team's sharpshooter and self-centered snark master. He backs up his bravado with actual skill, though, and has fittingly chosen a custom Corvette painted to resemble the 2009 C6.R GT2 in "Allspark Green" rather than Corvette Racing's traditional yellow.

The "collector coin" boxes are essentially a longer version of the standard Jada/Transformers box. The front panel has Transformers logo along the far right edge next to a portrait of Crosshairs. "See robot on chassis" is written in three languages above the portrait,. Jada's Metals/Die Cast logo, the Autobot symbol, "Chevy Corvette Stingray/Crosshairs," and the movie logo are printed along the bottom edge of the panel under the window. The end panel opposite Crosshair's portrait is folded to create a corner window, and repeats the Transformers logo, Autobot symbol, and Metals/Die Cast logo. The opposite panel repeats the portrait, disguise/name, and symbol from the front panel. The top continues and repeats the Transformers name logo from the front, and repeats the Metals/Die Cast logo. The back panel has co-sells for Optimus Prime, Bumblebee, Crosshairs, Barricade, and Hot Rod, all but Prime offered with and without collector coins. The bottom of this panel and the bottom have all of the legal/contact info. The inner tray is taped at both ends, so you will either need to open both end flaps to cut the tape or be ready to pull really hard on one end to tear the tray free of the tape on the opposite end. Crosshairs is held in place with two screws, while the coin is snapped into a unique plastic tray. Another tray holds the hatchback closed, while two plastic bands hold the doors and hood closed.

Mostly hits, but with a few misses here & there. The bulk of the casting is excellent, with the expected solid work and clean casting on the metal body. The clear plastic for the windows is equally good, and the fit quality is particularly impressive around the rear side windows and opening hatchback. The headlights aren't quite as nice thanks to some really ugly mount tabs putting holes in the chrome buckets, but those are par for the course on diecasts. The clear red taillights more than make up the difference, with a good tight assembly and no visible marks. Then we get to the hard plastic parts, and sprue attachment points remain at the left end of both the front splitter and rear wing. Also, the wheels are formed with shoulders for the unidirectional tires, but either the wheels are too wide or the tires are too narrow, so the faces of the wheels stick out past the sidewalls of the tires. The sideview mirrors are soft plastic with chrome inserts. Inside, the Corvette interior is cast in all black with chrome accents for the shift lever, pedals, and steering wheel. All of the details are there, with the gauge cluster and dash monitor represented by stickers. A black Autobot symbol is centered on the steering wheel. The engine is very basic, with a single chrome piece representing the intake manifold mounted on a shallow black pan representing the rest of the engine bay detailing. Another Autobot logo appears here, cast into the cold air intake, but looking closely enough to see that brings you close enough to notice the shallow casting around the front and sides of the engine. The chassis has a sculpted-in relief of Crosshairs, of which the less is said the better.

Back when the started their Fast & Furious line, Jada Jada had some paint problems. It appears they have not been fixed, because Crosshairs suffers from the same too-thin color coat. Every seam and character line is highlighted by the paint running from the edge. The black is much better on coverage, but has very soft edges between the colors on the hood and is misregistered slightly on both fender vents. Fortunately the rear half is much better, with sharp edges and perfect continuity of the stripes across the fenders, doors, and roof. The Corvette and Autobot emblems are sharp and perfectly aligned. The corner markers have been left unpainted, but hte rear reflectors are nicely painted a dark red that looks close to teh taillights above them. The chrome license plate and exhaust tips are accented with a black Transformers: The Last Knight movie logo and black innards, respectively.

The doors, hood, and hatchback cover all open and close. The hinges are smooth and most will hold in any position, though the hatch tends to droop if raised all the way. This edition also includes a collector coin. The coin is 2¼" (5.5cm) diameter and made of metal, so it's fairly heavy. One side features a relief of Crosshairs's face, while the other side has "Autobots," the Autobot symbol, the movie title, and Hasbro/Paramount copyright info. It's a nicely done if utterly useless addition to the car.

Crosshairs reminds me very much of one of Jada's classic Big Time Muscle or Dub City castings: a generally good quality casting of an immediately recognizable car, but more of a caricature designed to accentuate the 1:1's features rather than a true replica. Also like those cars it's bigger than the stated 1/24, coming closer to 1/21 scale.

This isn't Jada's strongest work by a long shot, but it's really not a bad collectible. As a modern take on their BTM/DC cars, I actually like it quite a bit: the sprue attachment points are easy enough to fix (and likely vary in severity from car to car), and the paint is too thin but not really awful. Those wheels still bug me, and may be worth replacing. In the end the good outweighs the bad and makes this worth picking up.