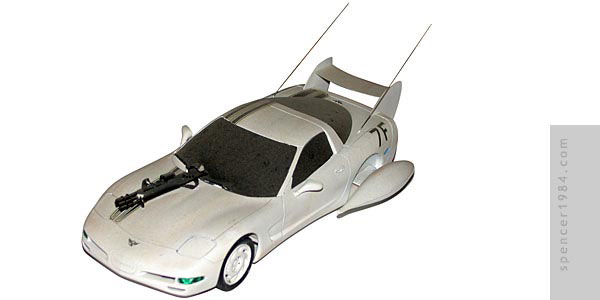 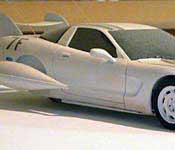 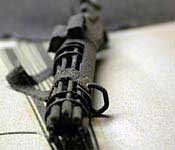 Another car that was used on my diorama. I had originally gotten the C5 to use the interior and underside in another kit, so I was left with the empty body shell. To me it looked like a UFO already, so I just took it one step further.

Customizing the kit was pretty straightforward. After the body was assembled, I added the control vanes with sheet styrene, and the laser pods were the drop tanks from a 1/48 P-38 model. The stripes were the side stripes from a 1970 Barracuda, and the 7Fs on the rear fenders were from the P-38 kit.

The figure seated on the hood of the car is a 3¾" Greedo figure from Star Wars. In 1/24th scale, he's 7' feet tall, which makes him big, but not outrageously so. I filled in the seams around his legs, and repainted his clothing into a flight suit and vest. The markings on his vest match those on the rear of the Corvette. Finally, the gatling gun was scratchbuilt from plastic stock and straightpins, with a shoulder strap made from medical tape.

I did come up with an explanation as to why this alien vehicle happens to look exactly like an Earthly automobile: it was done on purpose. The aliens look at size and design characteristics of local transportation before they arrive, so as to be able to navigate easier and more effectively. Occasionally, design must be secondary to function, however, so the defense and maneuvering features had to be left outside the hull. The Corvette was chosen after one of the aliens came across an issue of Car & Driver declaring the 1997 Corvette "The Best".