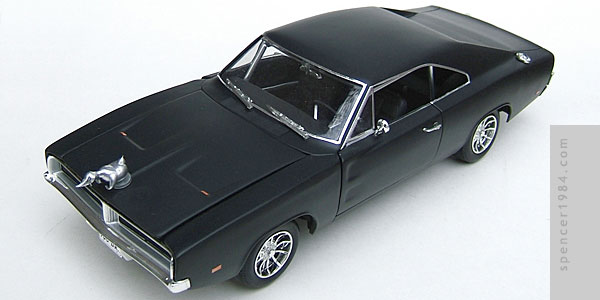 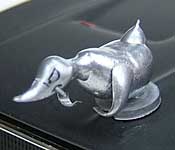 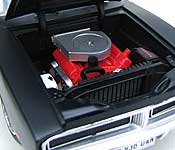 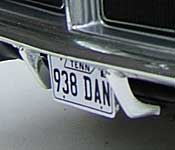 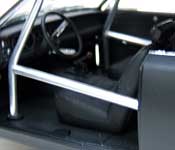 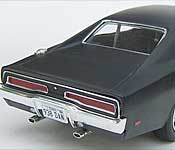 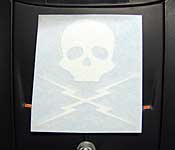 For this year's Holiday Auction, I went with a fairly recent movie car that has yet to appear in any scale: Stuntman Mike's 1969 Dodge Charger from the "Death Proof" sequence of Grindhouse. As always, 100% of the proceeds from Holiday Auctions will be donated to local charities this season.

The Charger was an homage to several television and movie cars, so it made sense to start with a famous car: the General Lee. I disassembled the General and repainted it matte black with a flat black interior. JoyRide's roll cage had some problems, so I scrapped that altogether and built a new one out of aluminum tubing. I also removed the General's grille guard and replaced the backup lights with actual clear lenses and added a set of movie-accurate license plates. Since I wanted this to look as much like an official release as possible, I made minimal changes to the General's engine and chassis.

That left only one major component to make this match the movie car: Rubber Duck's hood ornament from the movie Convoy. This wasn't something that could just be customized from something else, so I ended up sculpting the whole thing. The main body is shaped from epoxy putty, while the neck and beak are styrene. The main part of the head is a round bead, and the base of the tail is another bead. I ended up having to make the wings out of aluminum sheet, since styrene couldn't hold the correct shape. Two-part epoxy was used to bulk out some parts like the upper wings, tail, and part of the head, as well as affix it to the round base. The whole thing was painted with DupliColor Chrome, and details like the eyes and sneer were accented with black & white paint. To finish it off, I made the cigar from a short piece of wire.

Technically, the Charger never wore the skull and lightning bolts in the movie...but they were on the hood for certain promotional shots. So as part of this auction, Reprolabels donated a hood graphic that the winning bidder could apply if they wanted to.