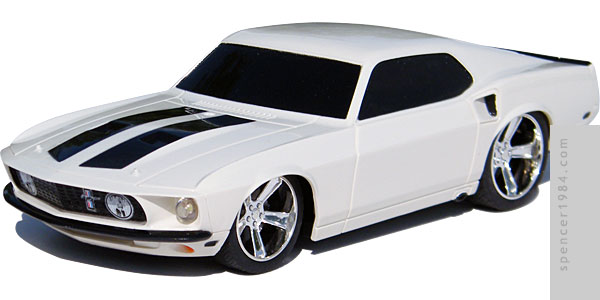 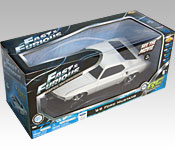 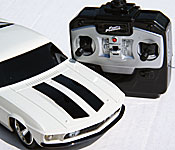 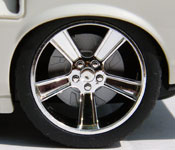 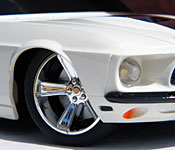 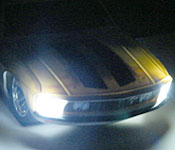 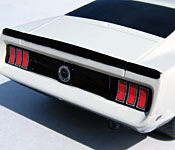 When the BMWs provided to Toretto's crew in London were shown to be susceptible to Shaw's electronic counter-measures, the crew decided to go low tech with a group of vintage street racers. While Toretto got his usual second-gen B-body, Roman Pearce took the Anvil, a custom 1969 Ford Mustang. It did not survive the ensuing chase, though, first being crushed under then becoming an anchor for the Chieftain tank commandeered by Shaw and his gang.

NKOK uses a simple rectangular window box, with the window forming the bulk of the top and front panels. It's a very bust design: the front panel has "Fast & Furious Official Movie Merchandise" in the top left corner, set in an irregular panel overlapping the window. A callout and icon for the lights is near the bottom left corner, above the age restriction warnings. "Ford Official Licensed Product" is to the immediate right of the warnings, followed by "’69 Ford Mustang" and a massive callout and icon for the full function RC nature of the toy. The NKOK logo and a list version of the car's RC features (Forward, Reverse, Left, & Right) are arranged down the right edge of the panel. All of this is set against a combination of black, blue, green, silver, and gray, mixing curves, dots, swirls, and solid fields. Finally, one sticker proclaiming "See the Movie" and another one stating "49 MHz" are stuck to the window. It should be a nightmare of activity, but somehow the designers at NKOK pulled it off. The top panel is much simpler, having only the movie series logo, NKOK logo, and battery requirement set on a swirly black field. The end flaps are identical: the NKOK and movie series logos at the top, a photo of the car with it's controller and "Full Function RC/Radio Control" callout in the middle, and "’69 Ford Mustang" at the bottom. Both are back to the texture overload of the front panel. The back panel rearranges everything that was on the end flaps, then adds line drawings of a car chassis and controller with instructional callouts to operate both. There are also URLs for the movie and studio, contact information for NKOK, the bar code, and a short marketing blurb. The identifier on the back panel claims the car is the ’69 Dodge Charger Daytona - oops. The bottom is a near-solid wall of text, providing all of the safety and legal disclaimers in English, French, and Spanish. Inside, the car and controller are held in a folded cardboard tray that has a (relatively) simple swirly background and plain black base. Be sure to go through the end flap nearer the controller: the one nearer the car is glued into place rather than being part of the main cardboard, and falls off easily. Two screws hold the car down, while a single thumb twist holds the controller to its wall. The antenna sleeve is fed through a pair of holes in front of the Mustang, and the Operator's Manual is slipped between the tray and an end flap.

The Mustang is surprisingly well done considering its price point and that it serves as an RC toy. The edges are sharp, the panel lies are straight and well-defined, and the separation lines have been minimized beautifully.There are still some faint traces of these aft of the side windows and in the roof, and there are two sink marks—one near the back of the hood and one in the panel between the rear window and the trunk—but overall this is a good looking piece. The front bumper and front and rear fascias are separate pieces, but fit so tightly to the body that I thought they molded into place at first. The main body is cast in off-white plastic, then painted a matching color to provide gloss and protect against scratches. The front bumper and chassis are cat in black plastic, the headlights are clear plastic, and the wheels are chrome plated plastic with vinyl tires and silver brake rotors (no calipers). The grille, hood stripes, windows, marker lights, side scoops, exhaust tips, and rear spoiler are painted gloss black. coverage is good, with minimal ghosting around the edges of all. The parking lights are painted orange. The high beams, grille emblem, taillights, and fuel fill are all printed details. There is no interior or engine, and the chassis is dominated by the steering adjustment battery box, and power switch.

This is a full-function, ready-to-run R/C vehicle with working lights. While the looks good and feels pretty solid, the controller is a tiny thing that feels pretty cheap. It works great, though: the car is quick and responsive, and rolls across bare floors and medium-pile carpet with no problem whatsover. It can even get through deeper carpets, though you may need to rock it back & forth a little as if you were in mud or snow.

Not so good. The overall look of the car is close, if a bit wonky on the proportions. The real failing comes with the small details: the wheel openings are too big, with the fender flares cutting too high into the body; the leading edge of the hood is part of the front fascia, with no break lines between the hood and headlight surrounds; there is an incorrect break near the bottom of the front fenders; the cowl vent is overly simplified; there are several missing paint apps; there are no door handles; the wheels are incorrect and placed wrong. Scaling is actually pretty good, though, with most dimensions coming in right around 1/24.

I had originally passed on these, as the photos made them look way too toyish for my liking. I'm glad I reconsidered, though - while this isn't a perfect match for Roman's Anvil Mustang, it's a surprisingly fun little RC car that also goes well in a static display with other 1/24 Fast & Furious vehicles. The longer I have it, the more I like it. Recommended.