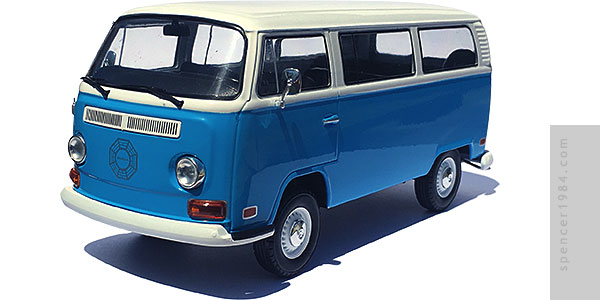 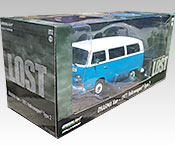 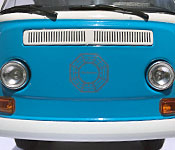 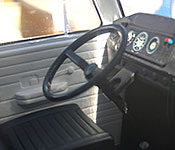 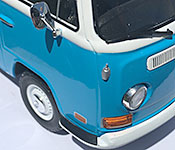 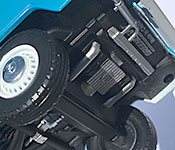 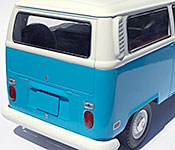 The DHARMA Initiative (Department of Heuristics and Research on Material Applications) was a research project in the series Field of Dreams that dabbled in fringe science. Among their myriad resources was a small fleet of Volkswagen Type 2 vans used to ferry people and supplies around the island. First seen as little more than a rusting husk in season 3, Hurley manages to get it restarted and it (along with several other vans) are seen in both current and flashback scenes through the remainder of the series.

GreenLight has moved to a much larger box for their VW Type 2, though the overall layout is the same as it has been for previous cars. Under the main window on the front of the box is the GreenLight Hollywood logo, "DHARMA Van - 1971 Volkswagen® Type 2," and "Adult Collectible." The Field of Dreams logo cuts into the lower right corner of the window, and "Limited Edition/1:24" is in the top right corner. The top of the box repeats everything but the vehicle description, with the title being centered over the window and the rest of the info flanking it. Each end flap has the same info as the front panel, rearranged over the show's stormy sky backdrop. The back has a large photo of the actual prop vehicle, more repeats of the front panel info, a short synopsis of the TV show, and a call to follow GreenLight on social media. The bottom has the required legal info. Inside, a printed backdrop places the van in the same stormy scene that's used on the outside of the package, and is held within a single plastic tray via two twist ties. Although it's arguably oversize for the Type 2, the box has a great presence and displays the vehicle clearly while also keeping it safe and easy to get in and out of the package.

As I've noted elsewhere, when GreenLight is on their game there are few better. This is an outstanding casting, with absolutely no sign of tooling marks, rough edges, or other flaws, and the two-tone gloss blue and white are equally well done. Panel lines are straight and even, adding to the professional appearance. They could be a little deeper, but that's really stretching for something to complain about. There are a number of separate plastic parts to further improve the look of the van. These include chrome plated for the headlights bezels and mirrors, white painted for the front vent and bumpers, black for the wipers, silver for the antenna base, transparent orange for the marker lights, transparent red for the tail lights, and clear for the headlights, reverse lights, and windows. Black paint accents the window gaskets, step plates, and vent openings. Silver is used for the front DHARMA badge, door handles, vent window posts, and side marker bezels. Orange and red are painted over these to form the lenses for the front and rear lights, respectively. With the exception of a small sprue attachment point on the bottom of the vent insert and a negligible amount of bleed where the door handles meet the body, these details are perfectly executed.

The interior is black with lighter colored door panels. Additional detail paint is limited to the dash face, but what's there is great: sharply printed gauge faces and cleanly painted controls with spot-on registration. It's especiaally impressive considering that you'll only be able to see them through the windows, so GreenLight could have easily cheaped out on this step. Seats and door panels are all correctly textured. The chassis is simple but appropriate for a Type 2, with decent detailing for the frame and a separate muffler with tailpipe. They even included some paint for the bottom of the engine and exhaust. The wheels are white with chrome caps and vinyl tires.

There is really only one flaw I can see, in that the shape of the vents behind the rear side windows seems off. This may be something that could be helped with some extra paint, but even as-is the nitpick is pretty small. Otherwise GreenLight has nailed not only the size and shape of the Type 2, they have the correct details for Lost with low-mounted front marker lights, dual sideview mirrors, and a wraparound step front bumper. Scaling is a near-perfect 1/24.

When this and the Field of Dreams VW were released at the same time, I was expecting a simple repaint and an extra roof rack for that wagon. I was not expecting GreenLight to actually make two distinct diecasts with unique details that went beyond the superficial. That they pulled off both of them so well is a testament to what they're capable of doing. Very highly recommended.