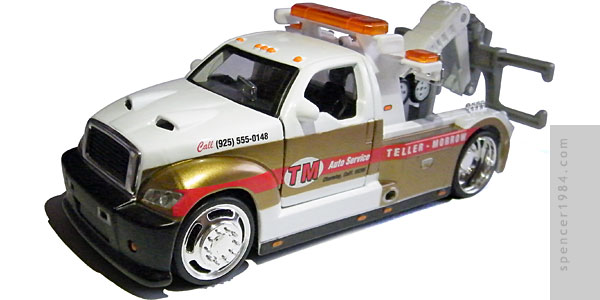 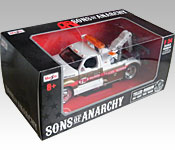 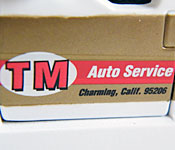 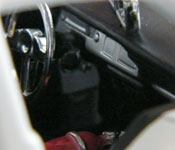 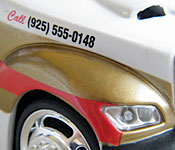 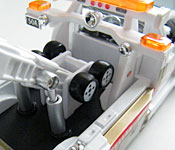 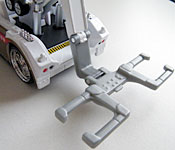 The Teller-Morrow Auto Service shop serves as a front for the titular motorcycle gang, while still conducting legitimate business with regular employees. Started by friends John Teller (co-founder and original club president) and Clarence 'Clay' Morrow, ownership of the shop eventually went to Gemma Teller Morrow after both husbands died (John having been killed before the series began, and Clay killed during the series' run).

Maisto went with a minimalist design for Sons of Anarchy: the window box is almost entirely dark gray, with all graphics and text done in black, red, or white. This includes the Sons of Anarchy title text and Maisto logo on the top, front, and both end flaps; the anarchy symbol on the top; a watermarked SoA symbol on the end flaps; and the scale, age restriction, and box contents on the front. The back panel has the Maisto logo next to a "Sons of Anarchy Official Licensed Contraband" banner, above a marketing blurb on a red field that takes up most of the panel:

"Patch-in" and ride alongside the outlaws known as SAMCRO with this collectible 1:24 scale die-cast replica of the Teller-Morrow Tow Truck. The Sons of Anarchy die-cast collection will make you feel like a member of the legendary MC. Take a ride on the wild side and collect your very own SoA Harley-Davidson® motorcycles, too. Just like your favorite sons from Charming.

The inside panels are all bright red, plain except for a watermarked anarchy symbol on the back panel. The overall result is very clean looking, and lets the tow truck stand out as the focus. The truck is held to the bottom of the interior tray with two standard screws, a wide clear plastic band holds the doors closed, and a thin clear elastic band holds the tow boom in place. The elastic band causes problems with the gold paint near the rear wheels: either it was installed before the paint was dry, or there was some kind of chemical reaction between the two. Either way, the band removed some of the gold paint, leaving white flecks in the gold area.

Most of the casting is very clean and well done, with the exception of the mold parting seams that go across the front fenders and sides of the hood. These are in an area of the casting that has compound curves, and Maisto wasn't quite up to the task of getting them cleaned up properly. There is also a little bit of flash around the openings of the hood scoops. Other than those two areas, though, the overall casting is very nicely done. The main body is metal, while the tow rack and boom are plastic. The body and boom are painted white, while the rack is cast in white. The color matching is very good—the rack is either thick enough or made from a plastic that resists translucency, so it does not suffer from a color shift where paint meets plastic. The only place where there is a color shift is the base of the boom, which was cast in black plastic (the tires on the tow dolly are left unpainted). This area has a slightly bluish tint to the white paint that doesn't show up anywhere else. Because this is limited to the tow dolly wheels and the base where the boom meets the bed, it's fairly easy to overlook. The headlights, windshield, and rear window are clear plastic, the light bar and outrigger lights are transparent orange plastic, the tow bed and chassis are black plastic, the wheels, grille, work lights, loudspeaker, and controls are chrome plated plastic, and the tires are soft vinyl. Chrome foil is applied to both side view mirrors for glass.

A wide gold band is painted down both sides of the truck, with a red stripe going through the middle of the gold (the stripe is in a straight line front to back, closer to the bottom of the gold band on the cab, and closer to the top on the tow bed). Black is used for the front bumper/air dam, grille insert, exhausts, and side skirts. Orange is used for the front marker lights, skirt lights, and roof lights. Silver is used for the bumper slots, exhaust tips, tool box latches, and tow boom cylinders. More elaborate printing is used for some of the detail work: "Call (925) 555-0148" on the hood, "TM Auto Service/Charming, Calif. 95206" on the doors, "Teller-Morrow" on the tow bed, and the tow rack lights, taillights, and warning stripe across the back of the tow bed. The only real paint issue here is with the gold: in addition to the flakes mentioned above, there is quite a bit of ghosting near the edges and some glop on the left side of the tow bed. Almost none of the edges are painted, so the fender openings, doors, and bottom of the body all have white stripes. The print work is phenomenal, especially the rear lights.

The inside is cast almost entirely in black, with separate 5-point harnesses cast in a softer vinyl and the steering wheel, fire extinguisher, door speakers, and rear-view mirror are cast in chrome-plated plastic (the latter having an unfortunate ejector pin mark clearly visible through the windshield). Paint is limited to the red extinguisher and silver for the dash face with no other detailing. The chassis is a nearly featureless panel, with more screw holes than sculpted details.

Both doors open & close, the tow boom can raise & lower, and the boom has three joints to allow it to unfold. The doors are great, using hinges that allow the doors to tuck inside the front fenders. The boom is somewhat less impressive. It only lifts about ½" (1.5cm), and has no way to lock in the "up" position. The joints in the boom have very stiff ratchet joints, which is great for durability but makes me concerned about paint wear if used more than once or twice.

The truck is based on the "Maisto Wrecker," an in-house design that combines styling elements of several vehicles, ranging from the 2nd-gen Dodge Ram to the International DuraStar. The result is a generic "truck" that serves as a license-free canvas for Maisto to use whenever they want to. It's cool, but looks nothing like the mid-90s Ford F-Super Duty used on the show. They actually did a very good job mapping the Ford's paint scheme to this design, right down to the white area at the bottom of the cab that does not continue onto the tow bed. The fonts are incorrect, but are likely a concession to getting everything to fit the reduced space here. Also, these wheels with their low profile tires would be useless for most truck duties.

A decent casting, so-so paint, exceptional printed graphics, and only the barest resemblance to its source material. This is clearly Maisto cashing in on their license with whatever tooling they had on hand, and the result is nowhere near as successful as what other companies have done. Even when Maisto did something similar for their Need for Speed series, they got closer than this. It's not bad, but not worth picking up unless you really don't care about accuracy or want to consider it an unseen custom the guys at the shop built in their spare time.