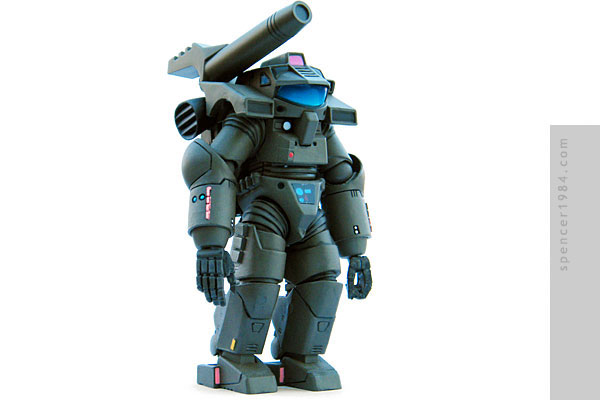 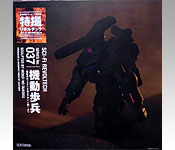 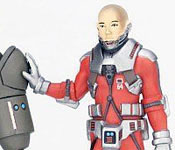 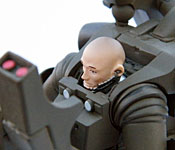 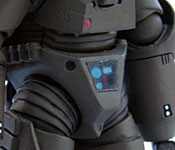 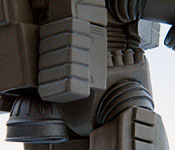 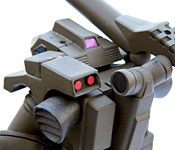 The idea of powered armor—from Halo to real-world military devices—can be traced back to the suits worn by the soldiers in Robert Heinlein's 1959 novel Starship Troopers. It was the first major work to use the idea, and continues to inspire artists and scientists decades later. One of those artists was award-winning science fiction illustrator Naoyuki Kato, who created the cover and insert art for the 1977 Japanese release of the novel by Hayakawa Publishing. Kato's art has become the definite look for the Powered Suit, and was used twice by action figure manufacturer Kaiyodo. Their first version was a diecast figure released in 2002, and then in 2012 they released this smaller version as part of their Sci-Fi Revoltech line.

Kaiyodo has packed the figure in a very "upscale" box with a hinged front panel secured by a hook-and-loop fastener. The front of the box has a large illustrated picture of the Powered Suit, with the series name (Sci-Fi Revoltech), series number (#037), sculptor's name (Mokei no Oukoku), and manufacturer info printed in English near the left edge. The figure name (Powered Suit (Studio Nue Design Ver.)) is printed in Japanese just below the series number. The sides of the box repeat the illustration and figure data, while the back of the box has several photos illustrating the details and optional parts included with the figure. The inside of the front flap is mostly text, providing a history of mechs and discussing Naoyuki Kato's work. Several of Kato's illustrations are provided near the bottom of the flap. Facing the flap is a large window letting you see the contents of the box. The suit is approximately centered in the window, with the accessories arranged around it. Everything is held in a plastic tray that slides out from the top or bottom. No direct mention of Starship Troopers is made anywhere, likely to avoid licensing fees.

Although simple in concept, the Powered Suit is a complex assembly of parts thanks to both the detail work and the articulation Kaiyodo included. The details are all sharp and clean, and everything fits together beautifully. Most of it is cast in hard opaque plastic, but the visor and diagnostic screen are cast in clear and the hands feel like a slightly softer plastic. The only real fault I find with the sculpt is the gun barrel, which is obviously shallow. It throws off what is otherwise a very realistic execution, and would look far better if it was drilled out. The wrists are also a bit weak looking, but since they are not supposed to be gloves (the pilot's hands are up in the suit's forearm) I don't really have a problem with them. The paint is excellent, mostly a matte brown/green with several separate washes and fills to bring out the details. My favorite is the visor, which has a dark-to-light blue fade behind the glossy clear plastic. The thrusters and hands are a raw metal color, and the lights and displays are all painted cleanly in various shades of red, blue, and gray.

It has several built-in weapons, including the hinged main cannon over the right shoulder and a rack of grenades on each side of its waist. The top of the suit hinges forward to reveal the pilot's head, which is articulated but non-removable. Articulation is theoretically good (cannon base, hatch, shoulders, elbows, wrists, waist, main thruster nozzle, hips, knees, and ankles), but I still couldn't get much movement out of it even after a trip to the freezer. The joints remain very stiff, and feel fragile enough that I was unwilling to push too hard and risk breaking it. The default "neutral" pose works for me, but this will be a big minus for many collectors.

In addition to the fixed weapons, it also includes a blue hand-held flamethrower (which can be held or plugged in to the side of the backpack), a fist for the left arm, an egg-holding hand for the right arm, a Revoltech stand that plugs into the bottom of the pack (allowing you to recreate jumping poses), a name plate, a storage box, and a pilot figure. The pilot is unarticulated, but well detailed with a red suit and silver mechanical details. It is posed with the right elbow bent and the hand open, as if leaning on the Powered Suit. Swapping the hands can be delicate work, but I ran into no problems.

This is a near-perfect 3D version of Kato's design, and as such does a pretty fair job of following the "mechanical gorilla" description used in Starship Troopers. Scale is easy to work out thanks to the separate pilot figure, which puts this at a near-perfect 1/24.

Other than the shallow cannon barrel and the too-stiff joints (I have seen these figures put into several poses, so your experience may vary), there is really nothing to complain about here. It is a great representation of the granddaddy of all exo suits, and while the price is a bit high you get a lot in the box. Recommended.