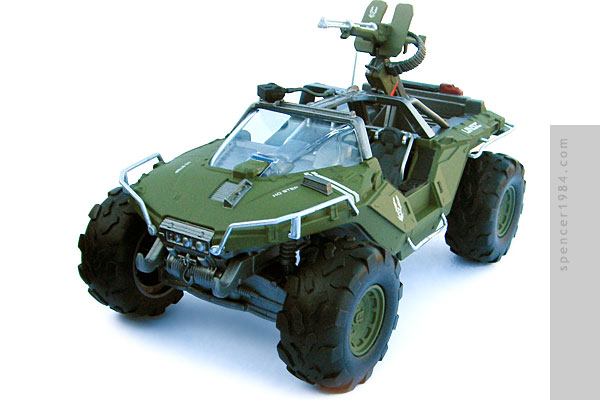 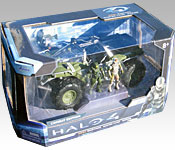 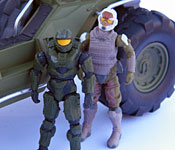 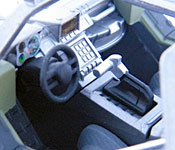 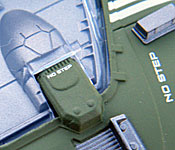 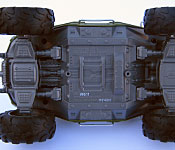 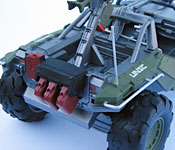 Officially known as the M12 Force Application Vehicle (FAV), the Warthog has become a standard fixture in the Halo universe. It serves as the United Nations Space Command's primary ground vehicle, used for scouting, recon, and infantry. It received a facelift for Halo 4, thanks to both better graphics and the advanced timeline of the in-game universe. Its first appearance was actually in Forza Motorsport 4, where it was an unlockable (though unusable) vehicle.

The Warthog is centered in a window box with a generous amount of space around the vehicle. The sides of the box are slightly tapered, with both front vertical corners truncated. The main front/top window and both end flap windows have irregular borders. The front panel has the Halo 4 logo, series number, contents list (twice), age restriction and warning, Jada logo, and an image of Master Chief. A small sticker near the bottom of the window on the front panel has the "Combat Edition" callout. The top panel has the "4" part of the Halo 4 logo and another repeat of the contents list, while the end flaps both have the full logo and contents list (for such an open window box, Jada really wants you to know that it includes the Warthog, two figures, and the turret). The back panel has the title, a brief writeup and photos of the Hog, and co-sells for the other vehicles in this series. The box bottom has the legal info and bar code. The inside of the back panel and box floor create a mini diorama with Master Chief and the Marine standing in front of the Warthog, and the turret mounted to the back wall. The figures are held to a half tray with rubber bands, and the Warthog is held to the base with two very small and poorly designed screws. You'll need a thin long-shaft screwdriver to get to them.

The previous Warthog model released by JoyRide was decent, but there was certainly room for improvement. Jada took that opportunity and ran with it, producing a fantastic looking replica that looks great inside and out. The main body is metal, but you'd never know it thanks to the sharp details and dead-flat military paint. It's accented with soft plastic bars around the perimeter, and more rigid plastic for the roll bar, interior, chassis, turret, and rear storage. The windshield is clear plastic, while the tires are soft vinyl over plastic wheels. The work is exceptional, smartly using a combination of separate and cast-in details. The paint helps as well: the graphics are printed flawlessly, and I cannot find a color bleed anywhere. The matching between painted and cast-in-color parts is as good as you can get, with hardly any color shift. The cockpit is well detailed, with separate handles, displays, and controls. The dashboard is clean and well-registered, and small details like the separate bar around the seats or the open space between the barrels of the M41 show that Jada went the extra mile to get this "right." The only thing that is out of place is the shiny screw head holding the storage compartment to the tailgate. I would have liked to have seen some other fastener used here, as it mars an otherwise great replica. The chassis is also slightly less impressive than the top side, but is still very good. The front and rear suspensions are separate pieces, giving the Warthog its proper "tough yet agile" appearance.

The Warthog features a rotating turret, and two figures: Master Chief and a marine. The figures are hinged at the neck, shoulders, waist, hips, and knees, and can be posed in the Warthog or stand on their own without too much trouble. They use joints similar to those in Hasbro's Transformers Human Alliance series, but the sculpting work is much better here. Unfortunately, the better sculpts mean more restricted joints.

Comparing it to screenshots from the game, this appears to be accurate down to the last detail. The chain gun has the correct updated shields and brace arm, the markings are all located in their proper places, and the hull details have all been recreated accurately. The suspension has been simplified somewhat, but nothing that ruins the look of the Hog. While Jada has no official scale listed, it measures out to be somewhere in the neighborhood of 1/30 - 1/33 scale, essentially the same scale as JoyRide's version. It's a nice bit of continuity, though I would have liked it to have been a little closer to 1/24 (the fantasy nature of the vehicle lets me cheat a bit for my personal collection).

For years, JoyRide's decent-but-flawed replica was the only option available for fans of Halo and the Warthog. Fortunately, Jada has now provided a replica that is worth your money, and would even look at home among more traditional military models. Very highly recommended.