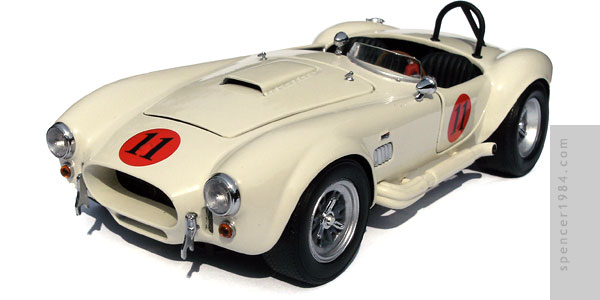 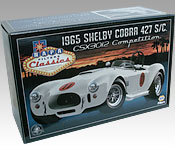 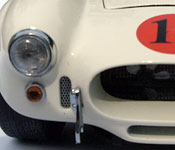 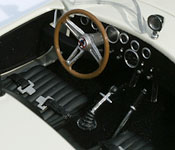 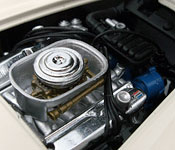 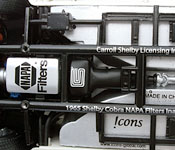 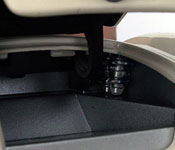 By 1963, the original AC bristol-based Cobra was losing its edge on the track. To regain its former glory, Carroll Shelby developed the Cobra Mark III, an all-new design that included larger main chassis tubes, coil springs at all four corners, a wider body with a larger radiator opening, and Ford's 427 "side oiler" V8. Chassis #CSX3012 was one of only 22 factory-prepared competition Mark III cars, built in the spring of 1965. After a short time on the circuit, it was sold to a private party who took delivery of the car in the spring of 1966 and agreed to rent the car to MGM studios for the upcoming Elvis Presley movie Spinout. In this, his 22nd movie, Elvis played a race driver/singer who drove the Cobra (now sporting a Wimbeldon White body with red rondells). While the movie was not considered one of his best, the iconic #11 is instantly recognizable to fans of both Elvis and Cobras.

The outer box features a large portrait of the car on the front, with the name, series, Cobra logo, and Napa filters logo arranged at the four corners. The series logo is repeated on the end flaps. A short blurb about the car and a Photoshopped picture of Carroll Shelby in the diecast are on the top panel, while the bottom panel lists the features of the diecast. Inside, the car is sandwiched between two styrofoam trays with tissue paper around the car. The car is also screwed to the bottom tray, a redundant decision made terrible thanks to someone at the factory stripping the screw holding the back center (vise-grips and side cutters were required to free the car). The packaging also includes the certificate of authenticity and other paperwork.

This car has been compared to Franklin/Danbury Mint cars by some collectors, and the observation is a fair one. The casting is clean and well detailed, with a high quality finish. Though the final result may not be up the the standards of the "Mint" cars, the ambition is clearly there and deserves credit. This includes separate chrome-plated plastic components for the light bezels, knockoffs, gills, mirrors, and body hardware; clear lenses for all of the lights and windshield; photoetched grille screens; and soft vinyl tires with detailed tread and sidewall patterns. The engine is equally good, with separate ignition wires, detailed radiator fans, and clean paint applications. Inside, the dashboard is painted flawlessly and the seats have separate belts. The flocked carpeting is also a nice touch, and really stands out on a roadster like this. The chassis is not bad, but suffers from to many advertising callouts and a poorly executed working suspension system. Rather than replicate the 1:1 design or hide the functional components behind well-detailed parts, the designers here chose to make the functional springs as bright and ugly as possible, painting them red to make sure you wouldn't miss them. They're mounted right next to the similarly-painted dummy springs, making the suspension look like a Frankenstein of ideas. Painting the real springs black (or omitting them altogether and ditching the "working suspension" feature) would have made things look a lot better. Fortunately, all of the bad decisions are on the bottom of the car, so you don't have to look at them. The paint is generally good, but does have a few minor scuff marks and the edges of the hood & trunk show some minor overspray. The graphics are all printed very cleanly.

The doors, hood, and trunk open and close smoothly, and the steering and suspension are functional.

The Wimbeldon White is a hair darker than it should be, but otherwise this is a very faithful reproduction of how CSX3012 looked in Spinout. Scaling appears to be a good 1/24.

The Shelby Cobra 427 is a legendary car, and the fact that CSX3012 was a factory-produced competition car and a movie star only adds to its appeal. While a few details prevent this particular replica from being outstanding, it is an excellent piece that does not disappoint. Recommended.