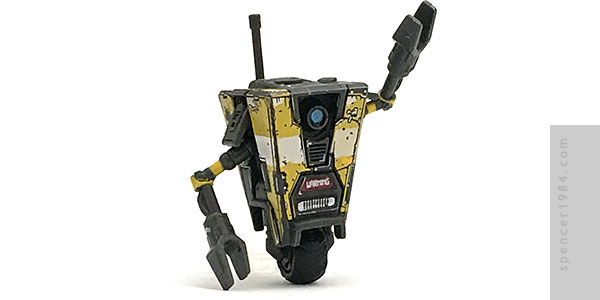 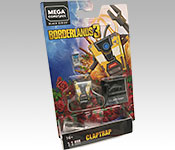 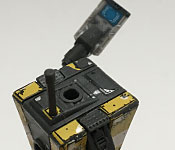 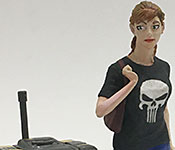 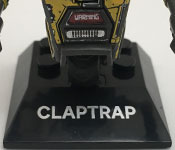 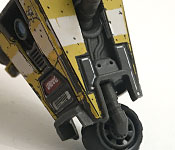 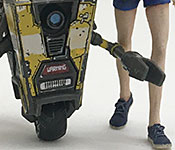 Claptrap is a CL4P-TP general purpose robot manufactured by Hyperion. It has been programmed with an overenthusiastic personality, and brags frequently, yet also expresses severe loneliness and cowardice..

Claptrap is packaged in a simple blister card, albeit one with a clever update. The background features a large portrait of the robot among the field of roses featured on most Borderlands art. The Mega Construx Black Series logo is at the top left corner, above the game title. A folded paper in the bottom of the blister has the age restriction, part count, item number, and character's name. Behind that are the bagged parts to complete the figure, and above it are separate bubbles for Claptrap, the base, and ECHO communicator. Now the clever bit: there's a pull tab just to the left of the communicator. Pulling that releases the entire blister, slowly enough that nothing gets lost but easily enough that you don't need any tools to open the package. The back of the card is plain cardboard with a black wall of text, listing all the various logos, legal information, and barcode. This part's pretty dull, but the eye-catching art and easy-open blister bump the design score up to a perfect "10."

Considering that Mega Construx toys generally follow a more "cartoony" aesthetic with short limbs, big heads, and other kid-friendly features, this is fantastic. Claptrap is cast almost entirely in dark gray plastic, with the only exception being the single soft vinyl tire. The fit and finish are as good as any more expensive collectible, and the joints are arguably even better. These include hinged shoulder flaps, ball jointed shoulders, wrist rotation, a ball jointed eye, and a swivel joint where the wheel armature meets the main body.

The paint work is just as good, with a weathered look that has been flawlessly applied. There are even bits of metallic silver paint thrown in to look like the paint has been worn through to bare metal, and the effect is great. All four sides and the top have unique applications, so it's not just a matter of repeating the same design several times, either. The yellow and white are bright enough to look like they were originally high-vis colors, but dull and faded enough to look like they were applied long ago. Just excellent work all around.

You'll have to assemble the antenna and shoulder flaps, the latter of which fit tight enough as to be difficult to install (a small flat-headed screwdriver was useful here). Once those are in place, you'll be left with his base, a two-piece arm that plugs into the base to hold Claptrap upright, and an ECHO communicator. The communicator fits in either hand, and uses a standard 3mm grip so LEGO figures would be able to hold it as well.

This is a near-perfect match to the game character. The only concessions I see are a little extra material for the antenna, hands, and wheel armature - all things that would need to be beefed up for a toy this size, regardless of who made it. I can't find an official size specs for Claptrap, just that he's "about 3 feet tall." He measures 1⅜" (35mm) not counting the antenna, making him suitable for display with 1/24 scale figures.

I've picked up a couple of the Mega Construx figures, but until now they were always as "toys" or "custom fodder." Claptrap looks great right out of the package, and is realistic enough to go with any other models in this scale.