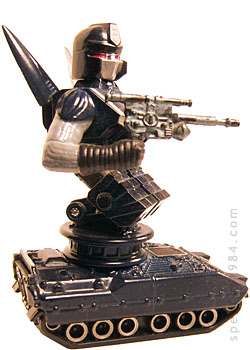 This is my interpretation of the sentinel droids described toward the end of the novel Vision of the Future from the Hand of Thrawn series by Timothy Zahn. The droids are described as heavy bodied with treaded bases. I started from the bottom, with a Matchbox M2 Bradley tank as the base of the droid. After the turret was removed and the top was filed flat, I added the rotating base from the head of a vinage R5 unit, and parts from various 1/24 scale models. The upper body section is a pair of modified arms from a Trans Former knockoff going into a torso from a small scale Gundam kit. The head was originally from a Gen1 Optimus Prime, and the arms were taken from a CommTech Darth Vader figure. Finally, the "wings" are the wingtips from a 1/48 Episode I Droid starfighter kit. The sentinel was finished in blue as a tribute to the Grand Admiral and to the Chiss (his species).