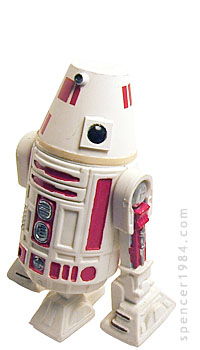 The R4 series Astromech Droids seem to have at least three variations. The first has a simple truncated cone head. The second has the same head, but has a square box on top of the head with the upper lens in it. The third variant has a combination head: a circular base blending into a square top.

This droid was built along the lines of the first variant. It was actually a fairly simple custom: the cone shaped head is little more than the rear barrel half from a Matchbox cement mixer. I added a base, cap, and the two lenses using sheet styrene and scrap parts box, and repainted the droid to resemble a picture from Star Wars IV: A New Hope.