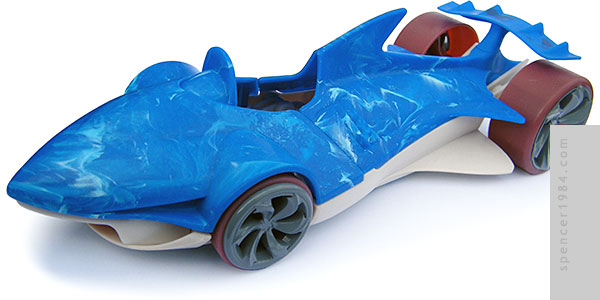 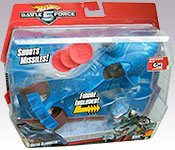 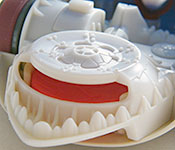 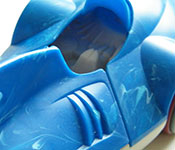 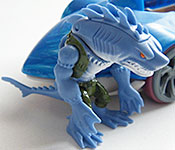 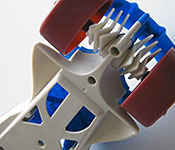 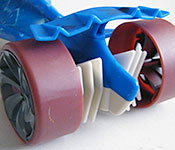 Among the enemies that the Battle Force 5 team faces off against is the Vandals, a violent group of anthropomorphic animals who settle any and all disputes through raw brutality. Within the Vandals are several sub-groups, including the oceanic Aqua-Jaws led by the sharklike Sever. Sever is a typical "dumb tough guy," more interested in his next meal than any rise in rank.

The Battle Force 5 standard vehicles are packaged in a roughly octagonal blister card 11" (28cm) wide and just over 8.25" (21cm) high. The clear blister takes up nearly the full front of the card, with only a 1" (3cm) strip across the top for the Hot Wheels logo/BF5 logo to the left of the hanger and "trading card included" text to the right. The official site URL is written along the bottom right edge. The rest of the front of the card is covered with a blue swirling electricity design framed with red mechanical elements. The vehicle and driver names and images are on a separate insert card, as is the legal information (the latter being folded to appear across the bottom of the packaging). The back of the card repeats the HW & BF5 logos, age restriction, and URL, plus it has images of the show's characters, a close-up of the driver for this particular car (Sever) and notes about the driver and the car. Below the images are callouts to "prepare for battle!" and "shoot missiles!" next to photos of Water Slaughter closed and open with the missile/disc firing. Across the bottom of the cardback are co-sells for Vert Wheeler/Saber, Zemerik/Zelix, Captain Kalus/Fangore, Stanford Isaac Rhodes IV/Reverb, and Zoom Takazumi/Chopper. Water Slaughter is snapped into a plastic tray, with the tree missiles/discs in a smaller tray above and to the left of the car and Sever in a third tray below and to the right of the car.

Water Slaughter is a pretty basic design at first brush, but actually has a great deal of sculpted detailing on closer inspection. Some of it, like the dorsal gills and rear diffuser are obvious. Other details, like the dermal scale-inspired wheel spokes and ridged teeth, are more subtle. Regardless of prominence, everything is very well done with sharp edges, tight panel gaps, and a smooth even casting. The dorsal tray, launcher, and rear diffuser/axle are cast in off-white plastic. The upper jaw and back are cast in blue plastic with white swirls. The tail and spoiler are cast in a softer solid blue plastic with paint used to simulate the swirls elsewhere on the body. The discs and clip that holds Sever in place are cast in bright red plastic. The rear tires are cast in a much darker red plastic with gloss gray paint on the wheels, and the front tires are dark red treaded rubber wrapped around gloss gray wheels. The only "interior" is the inside of the shark's mouth, which has a lot of sculpted details to suggest a technorganic origin: teeth surround a clearly mechanical disc launcher, and the symmetric lower frame is supported by what look like vertebrae. It's a very cool look that shows both skill and knowledge beyond the basic "make a toy shark," and really looks great.

The jaw hinges just behind the front wheels, opening about 30° with the main body piece is in place. Once open, the disc launcher is exposed and can be loaded with all three included discs. Once loaded, these can be fired by leaving the jaw open (it does not need to be open fully; just enough to release the internal switch) and wheeling the car forward. They fire at very near floor level, so how far they go depends on the type of surface you're on; I could get them to slide about 5' (1.5m) on a tile floor. There is also a 1/24 scale figure of Sever that can be placed in the cockpit. Sever moves at the neck, shoulders, hips, and tail. The bulk of his body is solid plastic, while his ventral spines and tail are a much softer vinyl. The joints are nice and stiff and the paint applications are good. He can be mounted in Water Slaughter by removing the main body shell, raising Sever's head and lowering his tail between his legs, then clipping him in so his head is between the front wheels.

It's a little on the stubby side, especially the nose, and the tab to open the jaw is pretty ugly, but otherwise this is a faithful representation of Water Slaughter. As with the other BF5 vehicles, it could use a few more paint apps but the skillful sculpting is truly impressive. It fits well with the other 1/24 BF5 cars.

Water Slaughter came out after the initial wave of Battle Force 5 vehicles, and so was difficult to find in standard retail locations. It's too bad, too, because it's another nice piece from a team of designers that clearly wanted to aim higher than "just a toy." As long as you can find it for a reasonable price, it's definitely worth tracking down.