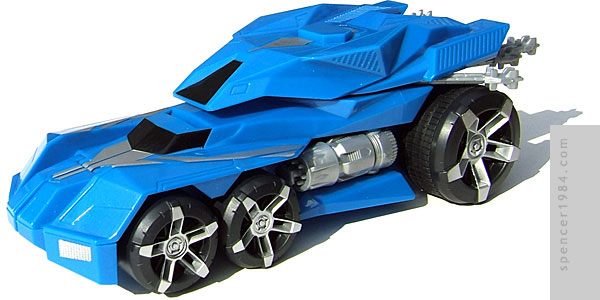 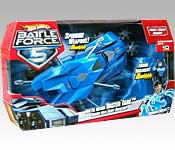 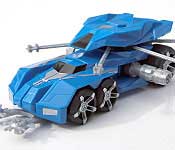 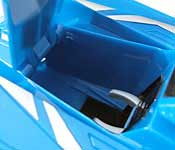 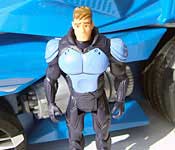 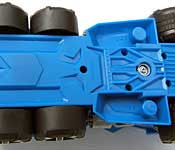 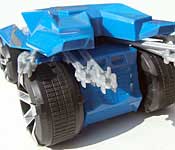 The Battle Force 5 deluxe vehicles are packaged in a window box that approximates the shape of the blister cards and is 8" (20.5cm) high, just over 14" (35.5cm) wide, and 4" (10cm) thick. The front panel features the Hot Wheels logo/BF5 logo in the top left corner, vehicle and character art and callouts across the bottom, and notes about the cartoon, included poster and coupon, and URL in the top right corner. "Spinning Weapons" and "Figure Included" are printed on small pieces of cardboard glued to the window and pointing at their respective selling points. "Battle Force 5" is written across the top of the box in a slightly lighter red than the box itself. The legal information is across the bottom of the box and on one of the end panels. The back of the box repeats the HW & BF5 logos, age restriction, and URL, plus it has images of the show's characters, a close-up of the driver for this particular car (Sherman Cortez) and notes about the driver and the car. Below the images are callouts of "heavily armed vehicle!" and "spinning weapons!" next to photos of Buster in "closed" mode and in "battle" mode. Across the bottom of the panel are co-sells for Vert Wheeler/Saber, Sherman Cortez/Buster Tank, Zoom Takazumi/Chopper, Stanford Isaac Rhodes IV/Reverb, and Kalus/Fangore. Buster is held to the back wall of the box with a set of four twist-screws. The forward weapons are snapped into place at the front of the vehicle, and hold tight enough that htere is no risk of them falling off in transit. Sherman is held in a second, smaller tray on a cardboard shelf along the right edge of the box. Packed between the rear of the tray and the rear of the box are a poster showing the BF5 team, a coupon for $3 off a BF5 racing set, and the instruction sheet.

Unlike the other BF5 cars, which are generally sleek and rounded, Buster is made up of flat planes and hard angles. It's a roughly "V"-shaped vehicle, looking like a cross between a semi truck and the Tumbler. And like the latter, it manages to convey both speed and toughness at a glance. The entire tank is cast is a slightly metallic blue, with silver paint on the forward grilles and stripes, and black on the two windshields. Despite the general lack of color, Buster does not look boring thanks to a lot of detail work: armored plates, hatches, and vents cover the entire body. The weapons are cast in silver-gray, and the wheels are cast in black with silver spokes. The tires are hard plastic, and the rear two have rubber treads to help activate the action feature. The cockpit is almost a complete write-off, with barely enough room for Sherman to fit in it and no detail work at all. The chassis is nicely done, with more panel and vent detailing.

Buster is the heavy artillery, and so it is fitting that it has a full 360° of coverage when in battle mode. The primary weapon is a set of flails around the turret. By raising the turret, the flails all spring to their respective positions and mesh with a gear in the rear axle that causes them to spin about as the car is rolled forward. This works much better than I expected it to: in the box, the flails looked weak. But in motion, the effect is pretty decent. Raising hte turret also deploys the side cannons, which are otherwise locked between the second and third axles. These extend as well as hinge, making them look more "finished." Stowing these weapons can be a little tricky the first couple of times you attempt it: first, you have to gather the flails into two bunches, three on each side of the turret facing rearward. Then, while holding the flails in place, press down on the button in the top center of the turret and press the turret down (all at the same time). When locked together, there is essentially no gap between the bottom of the turret and the top of the tank hull. Once this is done, you can collapse the side cannons and fold them against the sides of the hull. You won't be able to do this first, because the catches that hold them in place work only when the turret is closed. Finally, a pair of spinning weapons are mounted on a "U"-shaped arm that can be snapped under the front of the tank. These are not geared to anything, but they spin easily and are spaced properly to work as capture claws for any of the BF5 figures between them. There is also a 1/24 scale figure of Sherman Cortez that can be placed in the cockpit (with some effort). Sherman moves at the neck, shoulders, and hips, and features a nice amount of detail work including a tiny BF5 logo on his chest. The joints are nice and stiff and the paint applications are good, but he has such wide shoulders that squeezing him in the cockpit far enough to close the canopy can be quite a bit of work. A bigger cockpit or using Spinner instead of Sherman would've helped a lot. Sherman matches his character art pretty well, except Mattel used the exact same color plastic for his head that they did with Vert and Stanford, so his heritage got a bit lost here.

Like the other BF5 vehicles, paint applications is the biggest shortcoming here. The scuplted detail is all there and expertly done, matching the animation model very closely. Scaling may or may not be accurate, depending on which particular scene you're looking at...Buster is slightly larger than any of the other vehicles, which is usually correct, but does not dwarf them as it does in some scenes. It's about 9.75" (25cm) long (not counting the flails), 4.5" (11.5cm) wide, and 3.75" (9.5cm) tall. A little larger would've been nice, but it looks pretty good with the others.

Buster is an odd mix: the action feature is much cooler than many of the other cars, but stowing the weapons is tricky at best and may be downright impossible with smaller hands. The cockpit would be great with a smaller figure: you may have difficulty getting Sherman in and out. But it has a great combination of "tough but fast," and is my person favorite design of all the BF5 series. If you're going to get just one of the deluxe vehicles, Saber would be the better choice if only becasue it is the team leader. But Buster has a lot of play potential and can provide a nice contrast to the smaller, sleeker cars. Recommended.