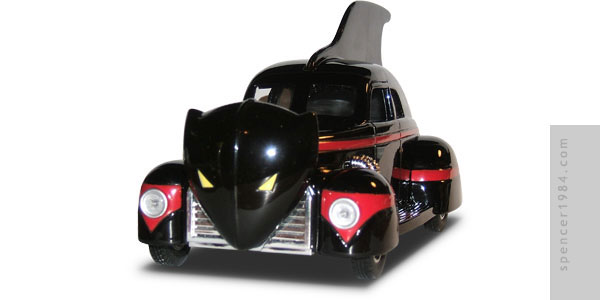 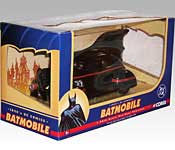 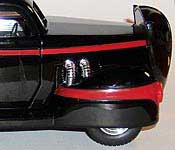 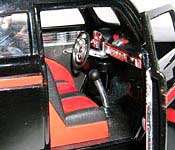 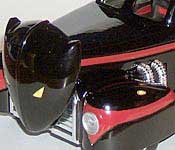 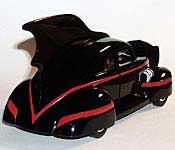 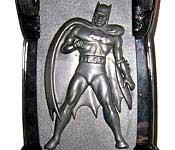 A blue & yellow window box with a '40s-style picture of Batman & the older DC bullet flanking the name of the car (under the window), and the Corgi logo on the bottom right corner under the DC logo. Windows at either end of the box allow for views of the front & rear of the car, with the name of the car repeated under each window. The back of the box has a photo of the car, repeats of the Batman drawing & name/logo set, and a tri-lingual blurb about the line. There are no cross-sells anywhere. Four twisties hold the Batmobile into a plastic tray, and a plastic strip holds the doors shut.

The body is primarily metal, with a plastic bat-mask and plastic fin. Once again, they have painted both plastic and metal parts, a nice touch (many manufacturers skip painting the plastic parts). The grill, header pipes, and hubcaps are chrome plated, and the headlights are clear plastic set in silver-painted buckets. Paint ops are few, but well done: a red stripe starts behind the bat ears and goes straight back over the fenders, ending in a "V" under the fin. A red stripe also appears on each fender at headlight height, and the eyes on the bat mask are bright yellow. All are done very cleanly, with minimal edge fuzz where the upper stripe curves around the back of the car. The paint on the doors was marred slightly by the plastic strip, but is nice & smooth everywhere else. I don't recognize the dashboard as any 1:1 car, I have a feeling that this is a total fabrication by Corgi's designers. If that is indeed the case, kudos to them. It looks era-appropriate, with a nice mix of satin black, red, and chrome. The red and black on the dash, seats, and door panels, really look like leather, and everything is very neatly painted. Era-appropriate bat logos appear on the seat backs, glove box door, and parcel shelf, with the steering wheel hub cast as a fifth logo. The only thing that detracts from the overall look is a too-thick shift lever, but this is a very minor nitpick. Excellent work all around.

You're not going to have a hard time figuring out the source material, but they did take a few liberties. The bat mask is wider and rounder, the windshields are smaller, and the exact arrangement of features is a little off from the comic. I get the impression that the car was made "safer," with the bat ears and fin tips rounded off. Scale is somewhat arbitrary on a fantasy car like this, but it fits well with other 1/24 Batmobiles.

This car was part of Corgi's second wave of Batmobiles, and though they've been producing Batmobiles since the 1960s, it is only their second replica in 1/24 scale. They did an excellent job here, capturing the look of this classic Batmobile while adding their own unique touches. I personally don't care for the Batman relief on the chassis (I would have preferred regular automotive details or a blank panel), but it has been a staple of Corgi's Batmobiles for decades. I would highly recommend this replica to all Batman fans.