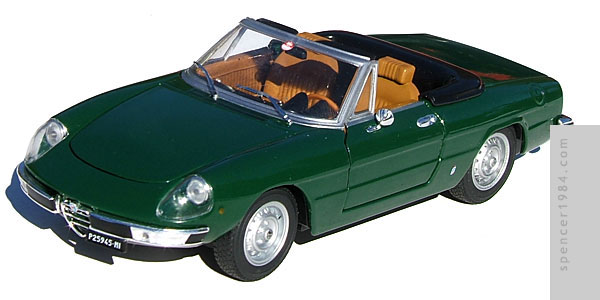 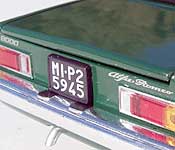 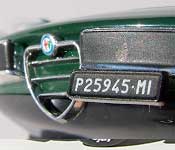 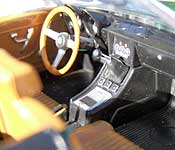 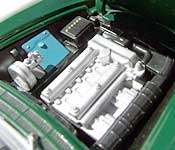 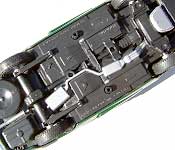 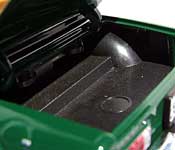 Fabbri Editori's 1/24 vehicles are packaged in a blister card, although unlike American-based blister cards these are meant to be stacked rather than hung on a peg. Unfortunately, the plastic blister is no stronger than the peg-ready packages, and is prone to crush damage. It is also devoid of nearly all marketing material - the only text on the otherwise plain yellow card is the scale, country of manufacture, Fabbri Editori logo, and two sentences worth of legal information. The glue holding the blister to the card on my example was also very weak, to the point where lifting the package by the blister caused the card to break free and nearly dump the model. The car is held to a two-piece base with four screws, and the name of the car is printed in white along a notch on one side of the base. The doors, hood, and trunk are held closed with clear round stickers, which tend to leave residue on the car body. It's not much to look at, and seems like anything rougher than the most careful handling (such as traveling in a box with other models) results in pretty severe damage. The packaging it a total write-off, not even good as a dust cover since crush damage results in cracks and holes in the blister.

Fortunately, the model is as good as the packaging is bad. The casting work, from the main body shell down to the separate windshield wipers, is outstanding. There are some especially nice details that show how well-though this model was, like the way the connector pins on the headlight shields are hidden and the nice, tight joint where the vent window meets the windshield (at first glance, I thought the glass was all a single piece of plastic and that the doors opened out from under the vent windows). The bumpers, grille, headlight bezels, wipers, door handles, and side view mirror are chrome-plated plastic, the parking lights, headlights, glass, and taillights are clear plastic, and the convertible boot is black plastic. Black paint is used for the bumper guards and cowl vents, silver for the window trim, transparent red for the taillights, and transparent orange for the side marker lights and rear directionals. The badges are printed in their appropriate locations and are both straight and legible. Tires are black vinyl over silver painted wheels, with nicely printed Alfa badges on the wheel hubs. The chassis is a nicely done combination of cast-in and separate details, including a detailed engine bottom and separate exhaust pipe. Under the hood is a very nice replica of Alfa's straight-four powerplant, with detailed carburetors, a separate exhaust manifold, separate brake booster, and detailed battery. The interior is done just as well, with fine detail work on the dashboard, door panels, and floor mats. The handbrake and gear shift are separate pieces, and paint has been used to bring out details on these levers as well as the gauge faces, steering wheel, door hardware, and center console. The only detractions here are the hollow seat backs and too-shiny plastic.

The doors, hood, and trunk all open. The hinges on the hood and trunk are especially nice and delicate. Everything opens and closes smoothly, though the passenger's side door doesn't want to stay closed tightly against the body.

For the most part, this seems to be a spot-on replica of Alfa Romeo's famous little roadster. The only thing that strikes me as off is the area behind the front seas, with what looks like part of a rear seat. This is almost entirely covered over by a tail on the convertible top boot, making me think that there may be full seats there. It's possible that Fabbri Editori cast a 2+2 interior with the plan to make later versions of the Spider as well, but on this older model they simply hid the bulk of the rear seats. Scaling looks a little small, around 1/25.5, but the internal proportions all look good.

There are too few 1/24 scale Alfa Romeos out there, a fact that becomes even more painful when you see what a great car Fabbri Editori has done here for such a low cost. It would be great if they could produce more cars from Alfa's history in this scale and for this price. As long as you plan to take it out of the miserable packaging they stuck it in, you will not be disappointed. Very highly recommended.