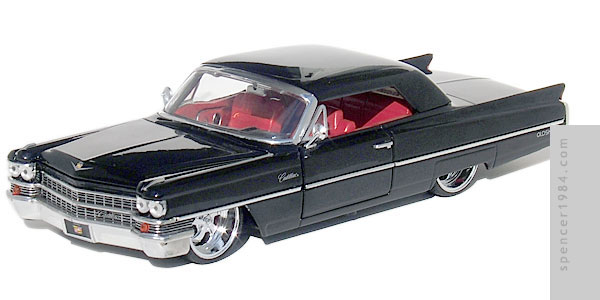 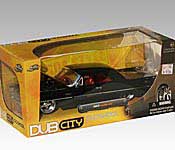 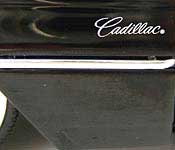 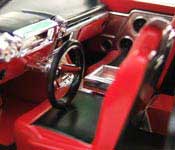 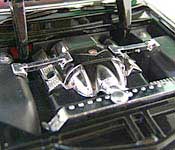 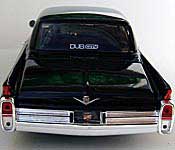 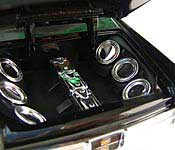 The box is Jada's standard three-window box. Primarily yellow, the box fades to a dark gray image at the end of the box around the rear of the car. "Dub City/Old Skool" logos appear on all six sides, as does the Jada logo. A sticker on one flap notes "custom sound systems," and all of the legal information is on the bottom of the box. The interior tray has two plastic molds capturing the ends of the car, and a plastic panel with two screws hold the car down.

Jada has been doing this for a few years now, so it's not surprising that they have it down pretty well at this point. The black is nice & clean, and looks like a vintage gloss black (not quite as deep as more modern paint jobs). Graphics are nearly nonexistant, consisting of "Cadillac" scripts on the front fenders, "OLDSKOOL" text on the lower rear panels, Cadillac emblems on the hood and trunk, and a "DUB CITY" logo in the rear window. All are expertly applied. The side trim, fender trim, door handles, sideview mirrors, windshield frame and bumpers are chrome plated pieces, and the headlights, taillights, and reverse lights are all clear plastic.

Inside, the seats, lower dash, and door panels are bright red, making for a nice contrast against the body. The upper dashboards and seat inserts are satin black, and everything is trimmed with bright chrome. Each door contains four speakers, and other custom features include the steering wheel and center console. Under the hood, the upper half of the engine is chrome plated (including the radiator tank) with the Cadillac logo over the intake. The trunk contains six chrome speakers surrounding three chrome amps. The Caddy rides low on chrome directional five-spoke wheels and low profile tires over disc brakes. Overall things look good, though the fit around the wing windows is a bit loose and chassis detail is almost nonexistant.

No accessories, but the hood, doors, and trunk all open. The panels fit together well, though they do suffer a bit from the typical oversize hinges common to diecast cars.

Overall, the car looks pretty accurate, without the custom bodywork common to Jada's cars. The top looks a little short, but just barely and could probably still be considered stock. The trim has also been altered some from a stock Cadillac (such as the script on the fenders and the oversize windshield trim), but it fits the overall look of the car. The car is a hair small for 1/24, but not small enough to be considered 1/25.

Jada is best known for their import customs, but their efforts toward older customs may be their strongest work. The designers responsible for these cars do an excellent job of keeping everything that made the originals "classics," while changing a few key features to bring things up-to-date. The '63 Cadillac is a perfect example of this: the elegant lines and feel are still here, while the custom wheels and updated interior all fit well. Recommended to fans of the Caddy or classic customs in general.