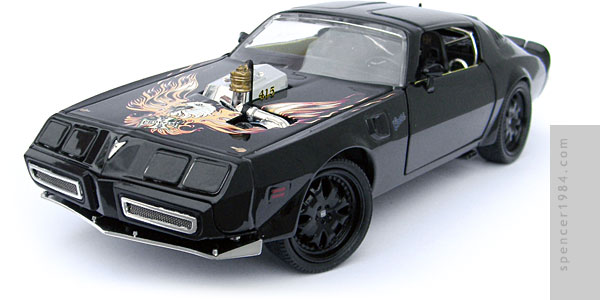 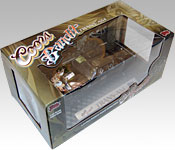 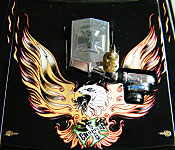 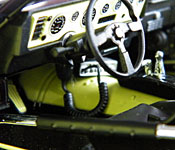 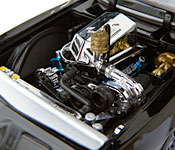 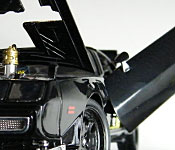 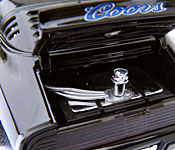 The effect of Smokey and the Bandit on the pop culture landscape went far beyond what could have been imagined back in 1977. After 30 years, multiple sequels, a made-for-TV spinoff, and the retirement of Pontiac, even non-movie car fans still associate the character "Bandit" with black & gold second generation Firebirds. In 2005, customizer Jesse James had achieved fame on the Discovery Channel's Monster Garage and was asked by the Coors brewing company (makers of the contraband featured in the first film) to build a special tribute car as the grand prize in a contest they were running. The result was the "Coors Bandit," a 1980 Firebird featuring combination scissor doors, a racing interior, West Coast Chopper 3-piece wheels, and a 700 horsepower engine with ProCharger induction. The contest was promoted through a series of limited edition 6-packs and a 1/24 scale replica of the car sold exclusively at Wal*Mart.

This being a "1 of 1" product line, the Coors Bandit is packed in a unique window box. It has the Screaming Eagle hood art in a desaturated gold, once with the head centered on the front bottom left corner of the box, and again centered on the top right rear corner. The spread wings form a swirling flame deco that makes up the bulk of all six panels. A stylized "Coors Bandit Trans-Am" and the Malibu International logo are printed on the top and front. The front panel also has the West Coast Choppers logo just above the car's name, and the scale, item number, and "Limited Edition Adult Collectible" written in plain white text. The Malibu International logo is repeated on both end flaps. The back panel has most of the legal info, including a very prominent "not intended for sale to individuals under 21 years of age." It also has the Malibu Intl. logo and URL for West Coast Choppers. The bottom has the Malibu logo & URL, GM & Pontiac logos, bar code, and the rest of the legal info. The inside of the back panel has the name, eagle, and "Limited Edition Adult Collectible" printed on a separate sheet and glued into place. The base is a plastic tray that holds the car in place with four standard Phillips head screws. The four corners of the box have been bulked up with square tubes glued in place, which also help secure the tray. Plastic bands hold the hood, doors, and trunk closed, and the roof panels are held in place with low-tack clear stickers.

This car is part of the reason why I was so disappointed with the quality of the Tommy Boy GTX and Dazed and Confused Chevy: Malibu International was capable of so much better. First, the fit and finish on this are just about perfect. Every panel lines up correctly, the seams are straight and even all the way around, and everything just fits together beautifully. Even things that have no business fitting together correctly, like the tight cutouts around the ProCharger and fuel fill, work flawlessly. Second, the detail work for something in this price range is fantastic: open mesh grilles, separate tinted headlight covers, vented brake rotors, separate 4-point Simpson racing harnesses, open side pipes, and molded defroster vents are just some of the details they could have easily skipped but didn't. In addition to the headlight covers, the windshield, T-tops, rear window, and taillight panel are also cast in smoke clear. The splitter, grille surrounds, Pontiac arrowhead, sideview mirror inserts, and rear license plate are chrome plated plastic. The sideview mirror housings and rear bumper cover are black plastic. The wheels are black plastic with vinyl tires, mounted over silver rotors with gold calipers.

The paint is a clean glossy black with just a little orange peel in the hood. Hood and trunk pins are printed in a thick gold that gives them a realistic 3D look. The side markers are the appropriate orange and red, the Coors logo is printed in blue on both front fenders and on the back of the rear spoiler (these are in the same locations as "Trans Am" was on the original car), and the screaming eagle clutching the West Coast Choppers logo is on the hood and tops of the front fenders. The eagle had the only real flaw I could find on the entire car: the gloss clear that was applied over it did not adhere properly, and had started to blister. Fortunately, the adhesion was so bad that it lifted off entirely without leaving a scratch and the art looks fine without it.

Under the hood, there is a full engine with very competent detailing. The block, belt assembly, air filter, and radiator hoses are black; the radiator, front cover, alternator, exhaust manifolds, supercharger, and shaker are silver chrome; and the valve covers are blue chrome with silver chrome breathers. Paint is used to further highlight many details: the dress panel at the leading edge of the engine bay is painted silver, the battery has silver, gray, and yellow details, the electric fans and supercharger connection are painted black, and the bypass valve, master cylinder, and brake booster are painted gold. "West Coast Choppers" is printed on the embossed logo on the shaker, "415" is printed on both of the shaker's sides, a large Jeg's logo is printed on each valve cover, and there is even a tiny information sticker on the top of the supercharger housing. At the other end, the trunk has a chrome and black fuel cell with the fuel lines and fill mount painted silver.

The outstanding detail work continues inside: the floor is properly textured to show the differences between raw metal and floor mats, and the dashboard is finely detailed with a separate insert for the detailed instrument faces. The pedals are cast in place, and the accelerator is a Moon Equipment bare foot painted to match the dash face/door panels/center. The door handles, window switches, radio face, and other dash details are all picked out with paint. There is a separate CB radio with a silver painted face and a coiled cord under the dash. The steering wheel is nice & delicate, with a printed logo in the center. There are separate chrome levers on the black shift box. The racing buckets have printed WCC logos and separate belts. The roll cage is chrome plated, with black paint on the pads by the seats. The former rear seat area is blanked off by the roll cage and a bulkhead with separate speakers. Even the rearview mirror is detailed with chrome glass in the black plastic housing.

The chassis is almost entirely made of black plastic, with separate front suspension/steering components, separate exhaust pipes, and a separate rear axle. The transmission and oil pans are chrome plated, and the bottom of the fuel cell is painted silver. Detail here is as good as it is on the rest of the car, with all of the appropriate ribs, fasteners, and lines present.

The hood, trunk, and both doors open & close. All of them open easily and hold their positions with no problem. The doors are particularly clever: to mimic the combination scissor doors on the 1:1, they have two hinges. One hinge swings away from the body, like a normal door. A second hinge is mounted perpendicular to the first, so that when the first hinge is at the end of its travel you can lift the doors into their final position (alternatively, if you think scissor doors look ridiculous, the secondary hinges are unobtrusive enough that you can simply ignore them). The front wheels are posable and tied to the steering wheel. Unlike most diecast cars, they don't automatically return to center and so will hold any pose you choose. Finally, the T-tops are removable.

The only real differences I see between this and the 1:1 Coors Bandit is the art. First, the "Coors" logos weren't on the diecast - the fenders were blank, and the rear of the spoiler had a stylized "Sumbitch" in red & gold (a nod to Jackie Gleason's famous portrayal of Buford T. Justice). Also, the hood eagle is simpler. The detail work is here, but it lacks the subtle shadowing of the full-sized piece. This was a limitation of the printing process used to apply the graphics to the car, though, so I have a hard time faulting Malibu when the alternative would have been some really ugly halftone screening. Scaling is just hair small, right between 1/25 and 1/24, but that means that it can look equally good with Franklin Mint's 1/24 classic Bandit car or any of the readily available 1/25 scale models. Malibu released two variations, one with a red body and one with a gold body, but the 1:1 Coors Bandit had the paint scheme you see here.

Regardless of your thoughts on James' modifications, this is an outstanding replica. The detail work and finish are on par with a much more expensive diecast, lacking only minor things like ignition wires. It's almost frustrating to see what a knockout this is, compared to Malibu's "Reel Rides" series just two years later. Fortunately, secondary market prices on these have remained low, and you can get one pretty easily. Very highly recommended.