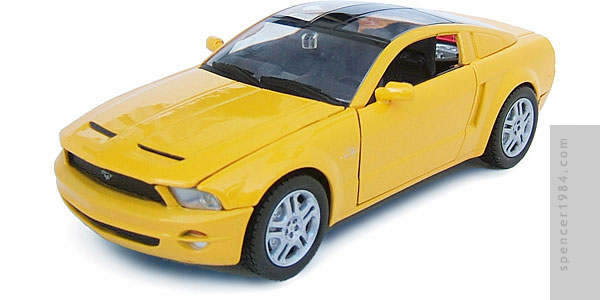 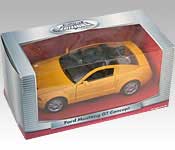 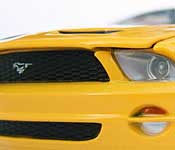 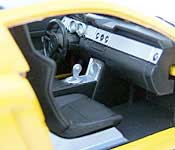 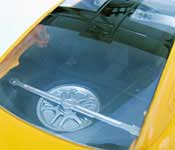 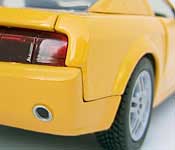 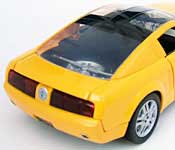 The Mustang GT Concept (also available as a convertible) was a KB Toys exclusive, packed in a silver-gray window box with a definite "machined" feel. A "Collector's Editions" seal is on the top panel above the window as well as on both end flaps and the back panel. "1/24 Scale Diecast" is printed on the front and both end flaps, and the specific model title is printed on a sticker placed under the window on the front panel. A dark red band along the bottom of the front panel and end flaps breaks up the otherwise achromatic look. The legal information is all printed on the bottom. Inside, the car is mounted in a three-walled red tray that more or less matches the band on the box. Plastic bands are used to hold the hood and doors closed.

Overall this is a decent but not spectacular casting. The doors, roof, and rear bumper all fit flawlessly, which is particularly impressive around the complex leading edges of the doors. The hood and front bumper fit aren't quite as good: the hood looks like it ought to close another scale inch, and the bumper doesn't match up to the rest of the fender opening on the driver's side. The hood casting also looks a bit soft, though detail around the rest of the car looks nice & sharp. The headlights, taillights, and windshield/canopy are cast in clear plastic, and look great aside from an oversized rearview mirror mount on the windshield. The paintwork on the canopy is especially impressive, with nice, sharp edges and even coverage. Sadly, the rest of the paint doesn't fare as well: yellow is not a very forgiving color, and there are a few missteps that really stand out. The bumpers (particularly the rear bumper) aren't the same color as the rest of the body, there is a bad flaw in the left rear fender caused by debris or bubbles in the paint, the painted hood scoop openings don't quite match each other, and the exhaust ports have noticeable bleed. Tampo printing is far better, with great looking fender badges and fuel cap, and license plate. The wheels are cast well, but have the brake rotors and calipers cast into them. This means that the whole brake assembly spins with the wheel. If you want the calipers correctly oriented, you'll have to adjust each wheel after you've set the car down. The interior is cast in black plastic with silver paint to bring out the details of the dashboard, door panels, spare tire, and seat mounts. A sticker is used for the gauge faces. Casting quality is very good, and includes the aforementioned spare tire (with carrier), four-point seatbelts, separate pedals, and open steering wheel spokes. The engine is also well cast, with a twin-screw supercharger, detailed valve covers, and a "GT" logo printed on the shroud at the front of the bay.

The doors and hood open, and the front wheels can be posed and are tied to the steering wheel. All the hinges move smoothly and close well, but the driver's door seems a bit loose. A word of caution: the trunk does not open. The seams around the panel are only there as a natural break line for the convertible deck. If you try to force it open, you'll likely damage the car or yourself in the process.

Ford unveiled the two GT prototypes at the 2003 North American International Auto Show; a silver GT coupe and a red GT convertible. At the time, these designs were considered essentially finished and would only receive a few updates before going into production. The designs seem a little off now that the Mustang has been in production for a while now, but MotorMax actually did a near-perfect job capturing the car in scale. The lines and overall proportions look spot-on, and the only error I can see is the shape of the baffling under the hood. The colors on this particular model are wrong, as the coupe was painted silver with a red and black interior, but a silver version was also available from MotorMax. Scaling looks a bit small, about 1/24.5, but everything about the car is scaled properly, including the concept's 20-inch wheels.

If it wasn't for the paint and soft work around the nose of the car, this would be a home run. As it is, it's still a solid effort and its original shelf price (this car was first issued in 2004) went a long way toward helping me overlook the few flaws. It's also fun to have as a comparison to newer diecasts of production Mustangs. Highly recommended.