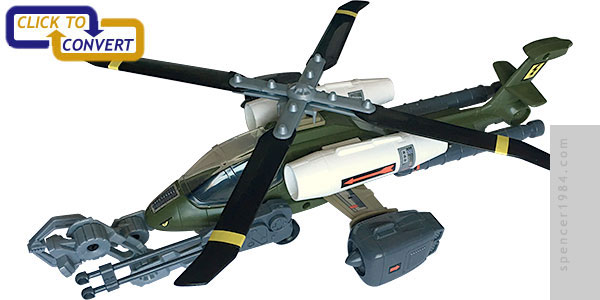 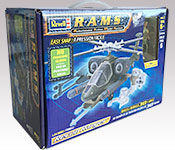 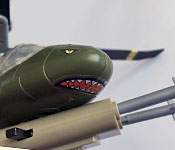 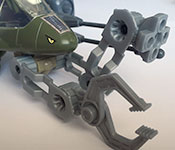 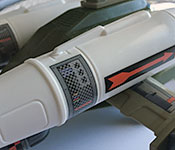 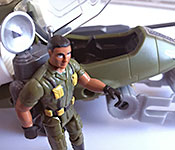 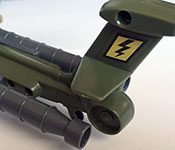 In late 2000, Revell launched an experimental series of toys in an attempt to attract new builders. The series was dubbed RAMS: Rebuildable Action Model System. A mini universe was created that pitted the RAMS Squad against the Techno-Raiders, with each side having vehicles that could be reconfigured using a modular building system. Six vehicles were launched in that first wave, with the heroes equipped with vehicles for every environment. Providing air support for the good guys, "the Recon Ranger, designed by former R.A.F. field medic and chopper pilot, Doc, is an incredible search and rescue machine." Late in the series the vehicle was renamed "Hover Hawk," though "Recon Ranger" remains the more common name for the vehicle.

The RAMS vehicles are packed in cardboard "lunch box" style packages, with a hinged lid and a plastic handle sticking out the top. The front panel has a large picture of the Recon Ranger with most of its gear attached just left of center, with a cutout in the top right corner revealing the included Doc figure. The Revell and RAMS logos are in the top left corner, just above multilingual callouts for "Easy Snap" and "No Painting/Gluing." The bottom left corner has the vehicle name under a 1/24 Scale callout. Under the figure window is a callout for his name and team affiliation. The bottom right corner claims that the Recon Ranger can be rebuilt "30+ ways." Both end flaps are essentially resized versions of the front panel, with the only difference being a cartoon drawing of Doc instead of the actual figure (like many of the others in the series, the cartoon and figure look almost nothing alike). The top panel has photos of the Recon Ranger in Humanitarian Aid and Eco Defense modes flanking the handle, along with the series title, team affiliation, vehicle name, and a repeat of the "30+" callout. The bottom has photos of yet another configuration, and the back has photos of the Recon Ranger's inventory next to co-sells for the other five vehicles in the series. Inside, all the parts are bagged and there is a separate instruction sheet, sticker sheet, and poster.

The instructions start with a spec sheet on the Recon Ranger, listing its driver (Doc), top flight speed (500mph), Armaments ("Equalizer" multi-cannon, "Side Splitter" torpedoes, twin Air-Lance launcher, and Talon Retrieval Claw), and special features (Equalizer Multi-Cannon has a variety of use...it is capable of spraying fire retardant foam or focusing laser beam energy; Side Splitter Torpedoes can drop supplies to people in need; and Twin Air-Lance Launchers are defensive weapons tat shoot down enemy missiles or clear dangerous obstacles). Actual instructions start on page 2 with the sticker placement guide, followed by three steps of snapping the aircraft together narrated by Doc in English and French. The bottom of page two shows the first of three "missions," aka alternate modes for the helicopter. Mission #1 is "Humanitarian Aid," and has only the basic helicopter. Mission #2 is "Rescue and Escort," adding the Twin Air-Lance Launcher, Thrust Turbines, and torpedoes. Mission #3 is "Eco Defense," which replaces the launcher with the Talon Retrieval Claw and adds the multi-cannon and Air-Ram Thruster engines. The first mission tries to shoehorn in some form of reconnaissance, claiming that information on a natural disaster in a remote locale is needed immediately. It's a bit clumsy, but at least some effort was made to try to justify the "Recon" part of "Recon Ranger."

Unique to this set, the main build is split into two large segments: the main fuselage with the interior and wheels already installed, and the tail. This allows the Recon Ranger to have a more realistic length while not requiring a larger box than the other sets. The fit between the two main parts is solid and create a good unified look, which follows the overall quality of the casting. Panel lines are sharp and even, and the separate parts of the main build all integrate nicely. While control surfaces are merely hinted at, there is a nice fully detailed turbine in the tail, and the cockpit has gauges and controls cast in place. The fuselage is cast in a military green ABS, the canopy is clear, the wings and rotor mount are dark beige, the rotor hub is silver, and the rotors and cockpit tub are black. The mount holes for the accessories are very obvious here, including one hole on each side of the rudder that can't actually hold any of the accessories since they all have two pins.

Recon Ranger doesn't "reconfigure" so much as the base helicopter just gets extra stuff stuck to it. Of these, the launcher and claw base are the same dark beige as the wings, the missiles and claw mechanism are silver, the torpedoes, multi-cannon, and thrust turbines are dark gray, and the air-ram thrusters are white. Joints are problematic across the board: the elements all snap together with no problem, but any movement or lateral strain pops them right back out. This is especially troublesome for the retrieval claw, since its whole purpose is to be an articulated mechanism. The launcher works fine, with the missiles traveling a good 3' (1m) when fired. The spinning rotor is nicely done, with a metal shaft that lets it spin freely. The stickers are more difficult than usual, in part because there are more here than any other set (24 total), and in part because nearly all of them attach to curved surfaces. You can help them lay flat with some careful trimming, but if you want them to really stay you'll have to use some adhesive.

Unlike the other vehicles in the RAMS series, the official paperwork for Recon Ranger specifically states that it's a custom design. There's definitely some AH-64 Apache influence, but not enough to try to make any direct comparisons. As I've noted elsewhere, making a series that mixes cars and aircraft almost always results in strange scaling, which s true here as well. Going by Revell's claim of 1/24, it has a fuselage length of 21' (6.4m) and a rotor diameter just short of 23' (7m). This makes it about the same size as a Heli-Sport CH-7, so while small it's not impossible. Doc is the usual RAMS fare, though his paint is better than most. His backpack fits very loosely, and can be tricky to keep upright.

With the possible exception of Switchblade from M.A.S.K., reconfigurable helicopters are difficult. Recon Ranger fares no better than most, with the extra gear looking sillier and sillier as you pile it on. The base helicopter is actually pretty good, though, and I appreciate the effort Revell put into trying to make it bigger than its series mates. I also like the extra detailing in the cockpit, which shows some extra thought went into the design.