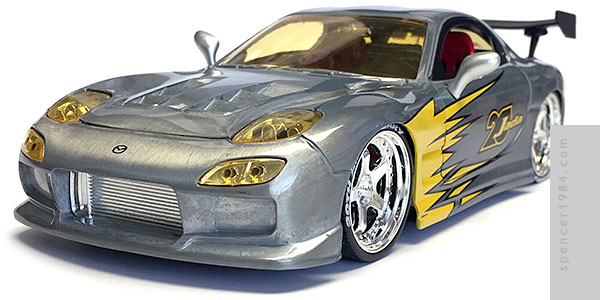 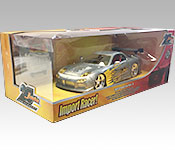 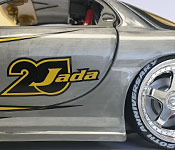 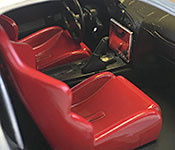 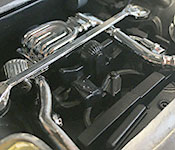 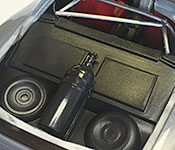 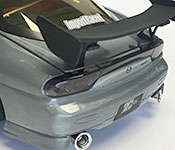 Jada once again partnered with another popular magazine in 2002 with Import Racer! Like its namesake, Import Racer! focused on Japanese imports combined with underground car culture with unique stylings, graphics and aero performance.

The Import Racer! packaging is one of the simpler variants in Jada's 20th Anniversary line. It retains the same overall appearance of previous cars, but the portrait on the right end of the box is a basic monochrome image of the FD against a plain red background. The series title is in its usual sport in the lower left, but again: the normally bright yellow and red text doesn't really stand out against the orange box. It's a nice look, just surprisingly sedate for a series normally known for loud engines and louder graphics. Three plastic bands hold the hood, doors, and hatchback closed inside the box.

Generally clean work on the casting, with smooth panels free from tooling marks, burrs, or other blemishes. There are a couple of minor gapping issues, particularly around the door frames. It doesn't look like a casting or assembly error, more like Jada simply ran up against the limitations of what was possible at this size when trying to capture Mazda's *extremely* round FD. They did what they could to minimize the gaps, though, so the result still looks pretty good. The fitment of the plastic parts is excellent across the board. These parts include transparent yellow for the headlights, parking lights, and windows; transparent smoke for the taillight panel; black for the wing and support struts; and painted silver with chrome inserts for the sideview mirrors. Like the rest of the cars in this series, the base color is a clearcoated raw metal. Yellow and black graphics and a matching 20th Anniversary logo are on each side of the car, "Import Racer!" is printed in white at the bottom center of the rear window, and the Mazda emblem is printed in black on the front and rear panels. A "20" logo is also printed as the rear license plate. The only non-graphics paint apps are the side and rear window frames, and while the rear window looks great the side windows have a fair bit of silver metal showing through the paint along the edges.

Under the hood is a simplified but recognizable representation of Mazda's 13B-REW rotary engine. Most of the engine and bay are cast in black, with chrome used for the intake (including the intercooler visible through the grille opening) and tower brace. The interior is likewise mostly cast in black, though it gets a few paint apps to go with the chrome pedals and dash monitor. The seats are painted bright red, the roll bar is painted silver, and a sticker is used to represent the instrument cluster. Separate parts include the handbrake, shift lever, steering wheel/column, and nitrous bottle. Even though these are all the same color as the bucket, their assembly means that the end result looks better and more detailed. Underneath is a standard Jada low-relief chassis, with a separate chrome Y-pipe for the exhaust and mufflers. Wheels are black vinyl mounted on chrome five-spokes over silver brakes with red calipers. "20th Anniversary" is printed in white on the sidewalls.

The doors, hood, and rear hatch all open on nice smooth-working hinges.

Another solid entry in Jada's Anniversary line. I'm still not a huge fan of the yellow graphics, but everything is technically well done and the car has a nice overall presence.