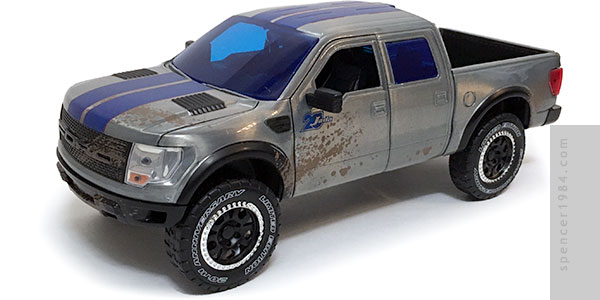 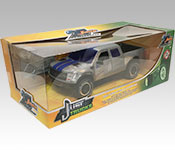 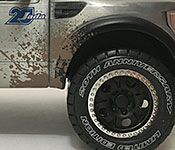 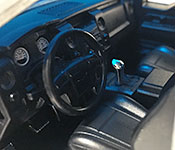 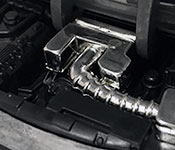 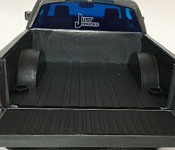 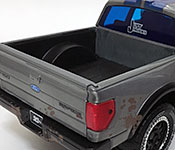 Introduced in 2014, Just trucks is everything truck related. From bigrigs to lifted off-road overlanders to lowered mini-trucks; if it's considered a truck, it belongs in Just Trucks.

Jada's 20th Anniversary box now sports a low 3/4 view of a lifted Hummer H2 in the lower right corner and "Just Trucks" in the lower left. The fade at the end of the box is now green, and the remaining photos and logos have been updated to match.

Jada went with their SVT Raptor to represent the "Just Trucks" line. The tooling is still relatively fresh, so the panels are nice and smooth and everything fits together well. The simple, clean lines of the Raptor make it easy to overllok some excellent subtle detailing, like the recesses around the side lamps and repeating horizontal line motif found on the doors, mirrors, and tailgate. Jada has captured all of these just about perfectly in the diecast metal that makes up the bulk of the body. The grille, bumpers, mirrors, and bed liner are black plastic. Clear plastic is used for the headlights, transparent red plastic is used for the taillights, and both are mounted over chrome buckets. Chrome is also used for the mirror inserts, and translucent blue is used for the window glass.

As with the other "Anniversary" vehicles, the base color is bare metal. Broad blue stripes with red pinstripe edges go across the hood and roof, a "Just Trucks" logo is in white at the bottom center of the rear window, and a "20" logo is in a matching blue on each front door. These are all applied well, with only a small spot of silver showing through the blue at each corner where the stripe passes over a roof indentation. Black paint is used to accent the fender flares and extractors, and while the color and sheen is a good match to the plastic parts there is a problem getting it to line up with the cast edges: in many cases what should be a sharp division ends up being a bit fuzzy. Finally, to help sell the "tough truck" idea, mud splatters have been added behind each wheel, the sides, rear bumper/tailgate, and across the grille/hood.

Under the hood is a somewhat confusing mix of parts. The Raptor's distinct 6.2L intake is a separate chrome piece, and directly under that is the expected alternator and riser support. But to the right is something that looks like it might be the right valve cover, except too high, too far away from the intake, and mounted backwards. Beyond that is a box where the battery belongs, but appears to have a washer bottle in its place. The coolant expansion tank is more or less where it belongs on the left side, but seems to have been melded into the master cylinder. Weird stuff, best to just keep the hood closed.

Fortunately, the interior makes up for the shortcomings under the hood, with excellent detailing of the dash, door panels, and seats. The pedals, shift lever, and mirror are chrome, everything else is cast in black. Stickers are used for the two main gauges, and are correctly placed. The chassis continues the good work, with a basic but passable representation of the modified F-150's underpinnings. It has an engine guard, exhaust (with separate chrome dual tips), 4WD drivetrain, fuel tank, and even the useless little spacesaver spare tire. Wheels are custom 6-lug beadlocks over silver disc brakes with red calipers. The tires are large but not exactly off-road treaded, with "Limited Edition/20th Anniversary" printed in white on the sidewalls.

Although not as strict as, say, their Tahoe, Jada kept the Raptor pretty close to stock. The overall shape as well as most of the internal proportions are correct for the Ford, albeit with some custom touches like the wheels. The engine oddities mentioned above mean that accuracy under the hood is pretty much completely gone, so it's barely worth mentioning that the grille is part of the hood on the F-150, rather than permanently mounted between the headlights as it is here. Scaling is a bit on the small side, coming in at about 1/26.

This is one of Jada's better castings, even taking into account whatever is going on with/under the hood. It looks good in its 20th anniversary colors, too. Worth picking up to complete the series, or as a decent standalone model of Ford's first generation Raptor.