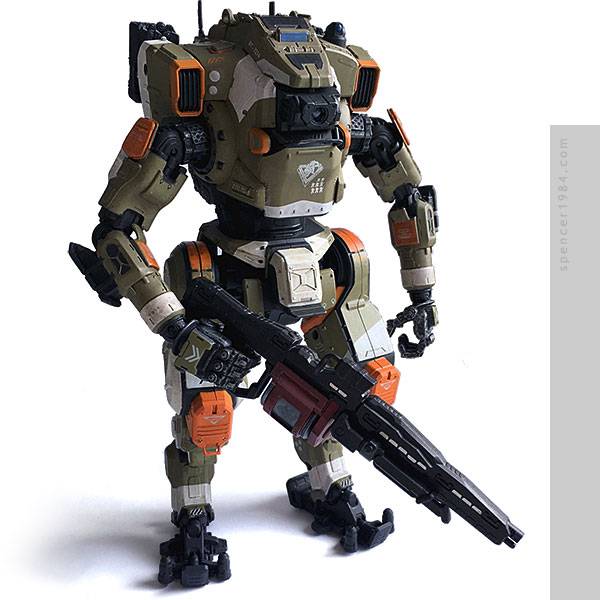 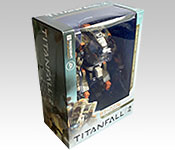 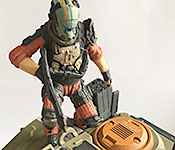 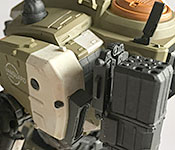 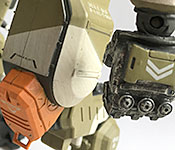 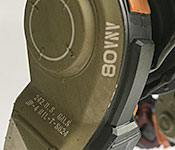 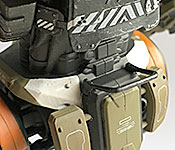 Far from Earth, the Interstellar Manufacturing Corporation (IMC) and the Frontier Militia battle for control of the Frontier and its abundance of resources. Captain Tai Lastimosa is a Titan pilot who falls in battle, leaving his protégé Jack Cooper to take over as pilot of Lastimosa's Vanguard-class Titan, BT-7274.

BT-7274 is packed in a large (9" (23cm) x 12" (30.5cm) x 5" (12.5cm)) box featuring a single large window taking up most of the front and top panels. "Titanfall 2," "BT-7274/Pilot Jack Cooper," and a pic of the front of the mech are printed across the panel under the window, with the Respawn/EA logos and age restriction/"Deluxe Action Figure" (in three languages) flanking the upper part of the window. The mech image wraps around to the left panel, which repeats the game title. The right panel has a different image of BT and Jack, and repeats everything from the bottom of the front panel while also including a McFarlane Toys logo. The top panel simply has the title and McF logos, and the bottom has all of the legal info. The back panel has two large pics of BT and a co-sell for McFarlane's 7" Jack Cooper figure. Inside, a sheet of printed cardboard serves as a backdrop to the figure. Everything is held to a clear plastic tray via clear plastic tie wraps. These are similar to the old wire tie wraps, and like those can be undone if you're patient of cut if you'd like to get at the toy quicker. BT has five ties, while Jack and the X016-A2 rifle are held with one each. There's also a small plastic tray fitted over BT's nose to prevent paint scrapes while on the shelf. It's a simple but effective design overall, and if you prefer to keep it packaged it makes a decent display piece.

BT is primarily made of stiff but hollow plastic, with softer vinyl used for details like the hands, antennae, and grab handles. The sculpt work is very good, with lots of small details scattered across the figure to make it look like a functional piece of hardware. Particularly nice are the dark gray areas of the face and back: these show off the most tech detail, and give the figure some interest compared to the flat armor panels. Everything is appropriately sized, with thin grab rails and correctly-sized (if primarily nonfunctional) hinges. Parting seams and assembly points are generally located along natural break lines, so visually the only things that look off are the screw holes in the legs and the armor plating on the thighs.

Assembly is not quite on the same level as the base materials, though: the blast plates over the mech's lower back were arranged unevenly, with one flap sticking straight out and the other tucked behind the side armor. I would guess "out" is correct, but since there's nothing to hold the now-warped panel in that position I tucked the other side in so at least it looks even. Also, the hydraulic hoses connecting the legs to the pelvis are thin, hollow plastic so they kink and fold rather than bend. Between that and one of them being disconnected from the pelvis, clearly some more thought or funding should have gone in to this detail.

Any shortcomings in assembly are generally made up for in the paint work. The base color is khaki green with white stripes and orange highlights. Gray and silver are used for most of the "functional" details like the hands, feet, joints, face, and back. These coors are generally applied cleanly, with only a little bit of slop noted where the knees meet the upper legs. A muddy wash has then been applied to the whole figure, and while some places have obvious brush strokes the overall effect is pretty good. Even better are the myriad small markings: hazard stripes, the squadron and mech IDs, and several specific warning labels are printed on the figure and without fail they are all sharply defined and properly located.

BT-7472 moves at the ankles, hips, wrists, elbows, and shoulders. They're OK, though not near enough to do more than some basic standing poses. Early descriptions and mock-ups of the figure also had knee and possibly waist articulation, but those were dropped at some point during development. It's possible that the knees were simply too weak despite the hollow construction, as the wrist joints on my BT fail to hold up the gun most of the time.

Also dropped was the opening hatch with detailed cockpit that was promised in early promotional material, though we do still get a 3" Jack Cooper figure. He moves at the neck, shoulders, and wrists, which allows for fine-tuning his look but little else. There is a waist joint, but the way the jacket is made it doesn't actually move more than a couple degrees either way. There is no leg articulation at all, so Jack will have to be posed squatting on BT's shoulder or seated somewhere with his feet up. Most of his sculpting and paint is good, with fine details, accurate proportions, and sharp edges. The only real problem is his left arm, which is either miscast or mispainted, as his wrist is thicker than his hand.

Lastly, a X016-A2 rifle is included and can be held in either one of BT-7472's hands. Getting them in there is a bit tricky thanks to the lack of finger articulation, but once it's in it fits BT's hands nicely. It's mostly black plastic with a bluish/silver ammo drum and dark red drum frame and trigger. Two rounds are visible on the feed between the drum and the gun, with gold casings and metallic blue bullets.

McFarlane claims to have used the digital files to create this figure, and I see no reason to doubt them. It certainly looks as accurate as one would expect converting the 3D files to a 3D object, and the paint apps generally follow suit as well. No scale is mentioned nor can I find an official height for BT-7274, but going by Jack's height this is just a hair bigger than 1/24 scale.

Your reaction to this figure will swing heavily based on what you expected and wanted. Going by the initial promises of a fully-articulated Titan with an opening cockpit and the ability to seat a fully articulated Jack Cooper, this is a huge disappointment with no knees, no waist, and severely limited everything else. But if you just want a huge mech that's looks cool on a shelf and more or less fits in with other mechs in your collection, then it's just fine.