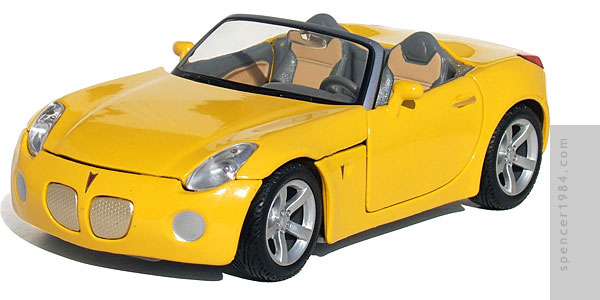 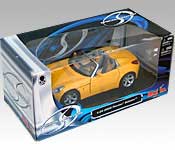 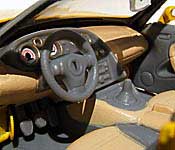 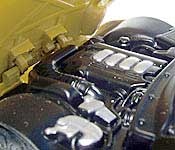 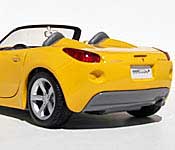 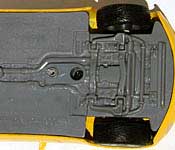 Maisto's "Special Edition" packaging is a relatively small window box with a blue & silver theme. The right 3/4 of the box, including the front, top, back, and end flap, show a stylized car done in a blue & black duotone, while the rest of the box is done in a "raw metal" look. The Maisto logo is in the bottom right corner of the front and both end flaps, and in the top left corner of the back. The Special Edition logo is in the bottom right corner of the front panel, top right of the top panel, bottom right of the rear panel, and centered on both end flaps. The rest of the box is covered with warnings and features, with all of the licensing information on the bottom panel. The scale, make, and model are printed on a sticker that is applied to the front of the box. The car is held to a cardboard tray by two screws, with plastic bands holding the hood & doors closed. The tray continues the exterior color themes, but reverses their locations.

Rather underwhelming in both paint and casting quality. The hood is an understandably complex shape, but it should still fit better than this: the driver's front corner sits tightly against the front fascia, but the gap widens and narrows several times across the leading edge of the hood. It also won't close all the way, leaving a wide gap where the clamshell meets the body (the passenger's side sticks up a bit further than the driver's side). The doors fit somewhat better, though the casting is wildly uneven: the windshield frame cutout is noticeably smaller and shaped differently on the driver's door, and the passenger's door has a rounder front bottom corner (leaving a large triangular gap between the door and the body). The front corners of the hood don't match each other, either: the driver's side has a straight horizontal cut, while the passenger's side has an extra corner added to help finish the fender lip. The paint is equally bad, with orange peel, thin spots, chips, and heavy spots (the driver's side marker light is completely obliterated thanks to the heavy paint). The headlights and taillights are made of clear plastic, but for some reason Maisto chose to put the mounting pins on top in all four cases, so that they are not only visible, but obvious. The interior and engine are halfhearted at best, with flat detail work, large gaps, and paint that frequently missed the target. The windshield frame is painted nicely, at least, but the rearview mirror has no paint at all. Speaking of mirrors, Maisto also missed both times when they tried to get the reflectors in the sideview mirrors: neither one is centered. The Pontiac, Solstice, and Arrowhead logos are tampo printed, and look good if a bit cartoonish.

The hood and doors open, the front wheels steer.

It's accurate enough that you can tell what it's supposed to be, but the details aren't all there. For example, the nose, sideview mirrors, and seats are shaped wrong: minor details in themselves, but when combined they throw off the overall look of the car. Also, it was nice that Maisto tried to liven things up by going with the steel/sand interior combination rather than one of the monochromes, but both colors are much brighter than the colors on the 1:1, creating more of a bumper gray/fleshy pink combination instead. Scale is a hair off here & there, but is close enough to 1/24 all around to call it good. Maisto resisted the urge to bump up the Solstice's 18" wheels, and for that I thank them.

I'm afraid Maisto really missed with the Solstice. They are capable of much better work, but it looks like they were either rushed or lazy in getting this one out the door...I'd even be willing to forgive the inaccuracies, as they were likely working from concept material when they started the tooling process, but the paint and casting quality are inexcusable. Unless you absolutely have to have a 1/24 Solstice in your collection, avoid Maisto's replica.