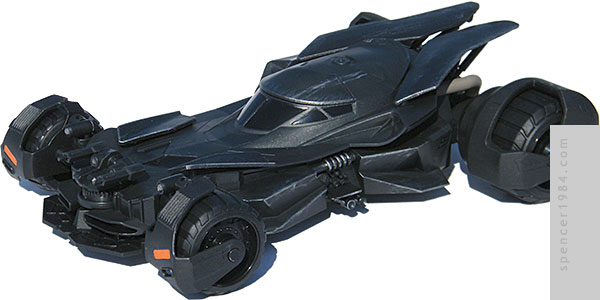 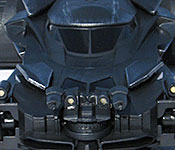 Building on the world established in Man of Steel, Batman v Superman: Dawn of Justice has the two titular characters facing off before finally joining forces to stop an even larger threat (and now accompanied by Wonder Woman in her live action big screen debut). Echoing Frank Miller's The Dark Knight Returns, Batman will use any and every tool at his disposal, including this Batmobile. Massive but sleek, this latest live action Batmobile is unique in that it is showing the scars of Batman's war on crime.

This is a massive box, measuring 18" (46cm) x 12" (30cm) x 5" (13cm). The front panel has a large window showing off the Batmobile, with the controller in the bottom left corner. The left side of the panel has the Batman v Superman movie logo and title, a stylized picture of the toy, and the Air Hogs logo. The right edge has photos of Henry Cavill as Superman and Ben Affleck as Batman in their typical "hero" poses, just above the DC Comics and Spin Master logos. The bottom edge has "Batmobile/Official Movie Replica" in english and French, a photo of the controller with its callout, and a note about batteries (USB charging for the car, two "AA" type for the controller). The end flaps have the BvS logo, a photo of the toy, "Batmobile," and AirHogs.com. The two panels aren't identical, with one having a straight-on view of the Batmobile and the other having more of a 3/4 shot. The top panel continues the window from the front, with a second smaller window cut in the shape of Batman's symbol next to it. The Batfleck photo, "Batmobile," and BvS logo/title repeated from the front panel. The back panel is dominated by a photo of the toy, surrounded by callouts to its features: "Rear Afterburner LED," "USB Rechargeable Battery," "Motorized Gun Turret and LED Headlights," and "Full Function Control" with a smaller picture of the controller. The BvS and Air Hogs logos are in the top right and bottom left corners, respectively, and the bottom strip and bottom panel have all of the required legal jargon. The Batmobile itself is held on a cardboard plinth in a full-size cardboard tray. Both are surprisingly sturdy, and are glued together in a way that reinforces both. the tray is printed with a gray cityscape. You access the four plastic twist screws that hold the Batmobile through a perforated door in the bottom of the plinth, which also holds the USB cable. The controller is held in place by another plastic twist screw and a single plastic strap, which is the only thing that needs to be removed with a tool. Over all it's nice work: simple and sturdy, using the established movie color scheme and showing off the Batmobile nicely.

Spin Master had the unenviable task of recreating the BvS Batmobile in a way that not only captures the look of the screen car, but could survive the rigors of being a full-function RC vehicle. Unlike previous cars that could get away with a simple shell and a limited detail parts, they really had to work to get a good looking and still workable car here. Fortunately, they acquitted themselves admirably with a wonderfully detailed body that is smartly assembled. Panels are clean and sharply defined, and everything fits together nicely. A few small sink marks are visible in the rear wings and rear corners of the roof, but given the intentionally distressed look of the car these look less like casting flaws and more like additional wear. Control vanes and armor plates are somewhat too thick to be prototypically correct (as is the front suspension), but once again the unique nature of the car makes these all part of an overall satisfying package.The gun turret and front wheel shields are separate assemblies that are firmly attached to their respective action features (see below). The only things that stand out as incorrect are the bright silver screw heads holding the front end together: I wish these had been painted black like the wheel pins. They are a very minor nitpick, though, and a few seconds with a black Sharpie could eliminate the bulk of the problem. There's also a slight assembly error on my copy, where the starboard rear wing assembly was not properly seated against the body. It's only visible when viewing the underside of that wing and comparing it to the other one, so it doesn't pull down the score by much, but it is there. The chassis has a simple but effective geometric embossing to represent the Batmobile's armor-plated underside. The necessities of it being a toy—screw holes and mount points in this case—once again work in the car's favor, looking like intentional features (smokescreen emitters? jump jets? caltrops dispensers?). Because it has an internal rechargeable battery, there is no battery box cover. The steering adjustment is still present, as is the on/off switch and required legal verbiage. All four tires are soft hollow rubber.

Befitting a Batmobile, everything is cast in matte black plastic: body, details, suspension, and chassis. Orange paint is used for the front markers, gloss black is used for the canopy glass, and a brownish-gray is used on the pipes under the rear wings. The body has had a silver drybrushing to indicate wear & tear, a bit heavy handed in places but generally nice looking. After playing with it as an R/C vehicle for a bit and earning a few new scrapes and bruises, the patina looks even better (unlike some Hollywood-themed R/C cars, this actually improves with a few extra dings). Three small tampos are printed on the rear axle: two triangles marked "Emissions/Thermal/Danger" near the vents by the wheels, and "Vent - Protection" with an electrical warning symbol on a yellow field over the differential. All three are sharply printed and easy to read.

This is a full-function R/C vehicle, with forward and reverse directions and front wheel steering. The car is responsive and easy to run, and the wide, flat shape helps keep it steady over carpeting, floor, and asphalt. I wouldn't recommend off-roading with it, but Gotham is an urban environment so its lack of hill climbing abilities should be no surprise. Somewhat surprisingly, the steering motor is louder than the tractive motor. This may be in part due to the extra "stuff" that the steering motor is moving: the front guns and wheel shields move with the steering. The four front LED headlights are nice & bright, and the two center ones move as part of the gun turret. The rear light (indicating the exhaust port) gets brighter as the throttle is increased. All five lights will flash if the car and controller are not synched: slower if you haven't turned on the remote yet, faster if they were synched but the controller lost power. The Batmobile's internal battery is recharged through a micro USB port on the side of the vehicle. It comes already charged out of the box, so all you need to do is supply the controller batteries. Once the internal battery finally dies, the included cable can be plugged into the car and any USB outlet or wall adapter. The instructions mention waiting 10-15 minutes between running and recharging, to give the battery a chance to cool off. A red LED next to the port indicates when the car is charging, and switches off when it's ready to run.

Overall, I am impressed by the work done here. Some sacrifices were inevitable, but Spin Master was very smart about the way they did it and only the most hardcore rivet-counters will object. All of the broad strokes are here, from the twin grille openings over the splitter to the origami-like side panels. Scaling is approximately 1/20 - 1/22.

Usually if I get an R/C vehicle, it is for display only and may not even get batteries put in it. But this was a happy exception, and is a blast to drive around. The working lights are a neat touch, and I love the idea of the internal rechargeable battery. Much as I'm looking forward to seeing what Jada and Moebius do with their model kits, this will not be going back in its box anytime soon. Highly recommended.

Our thanks to Spin Master for providing this review sample. Have a question, comment, or criticism about this review?
Send me an e-mail with your thoughts!